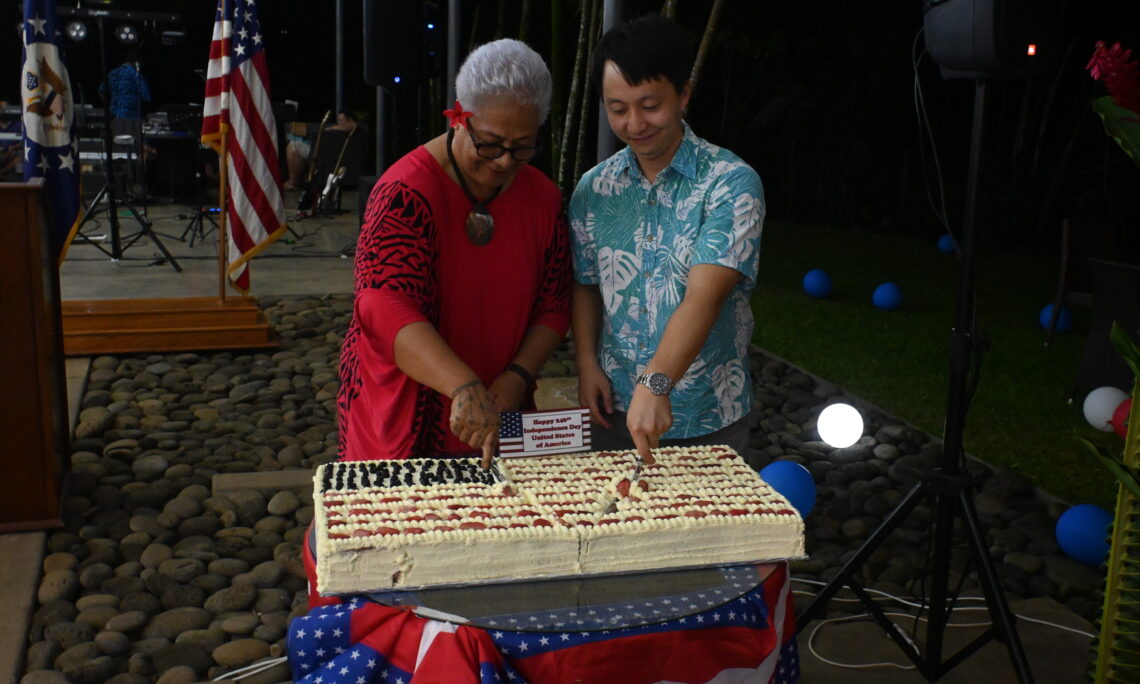 “I’d like to thank the many Samoan people who welcomed my family with so much alofa, teaching me life lessons about tolerance and diplomacy. We trusted Samoa to take care of our family and will never forget the warmth and generosity we experienced here.”

Thank you, Father Pesamino Victor for that kind prayer.

Your Highness the Head of State and Masiofo, the Right Honorable Prime Minister, Honorable Deputy Prime Minister and Honorable Members of Cabinet, Honorable Chief Justice and the Judiciary, Honorable Speaker of Parliament, my Distinguished Colleagues in the Diplomatic Corps, Ladies and Gentlemen.

Talofa lava and good evening.  Jihyun and I are honored to welcome you on behalf of President Biden and the American people to our 246th Anniversary of Independence.

Tonight marks our third and final Independence Day in Samoa.  We arrived in Apia in the early days of the pandemic.  Accustomed to lockdowns and the global onslaught of the deadly virus, the international community was impressed by the vigilance with which Samoa kept COVID off island.  Millions perished overseas.  Samoa was safe.  Samoa vaccinated its entire population.  And now, Samoa is successfully re-opening borders in a few weeks.

Along the way, the United States was proud to partner with Samoa in the fight against COVID.  We provided PPE and almost 50,000 Pfizer vaccines, in addition to USD 4 billion in 2021 alone, as the world’s largest donor to the WHO’s COVAX Facility.  As you open your borders, the United States will continue to support your efforts. We also have moved to open our borders – since June 12, aircraft passengers headed to America are no longer required to obtain a negative PCR test.

In some parts of America, children were unable to attend school for over a year, but here we partnered to ensure that we continue to prioritize children.  Our Embassy renewed a grant for the Ministry of Education, Sports, and Culture to provide literacy, math, and basic computer studies at the American Corner in Apia, free of charge for all.  And tonight, I am honored to announce we will open our second American Corner in Samoa shortly, in Salelologa.

The United States supports a free and open Indo-Pacific region.  Over the past year, the U.S. Coast Guard has patrolled Samoa’s Exclusive Economic Zone to support your efforts to protect your fisheries and marine resources.  The United States also provided equipment and extensive training to Samoa’s Police Service.  We are committed to partnering with you to ensure security and freedom of navigation in the Pacific.

Regarding security and freedom, we note increasing challenges around the world to our goal of realizing a liberal, free, open, and democratic global system.  The United States of America maintains a powerful network of allies and partners, a growing population, the world’s most dynamic economy, and a thriving culture of innovation and entrepreneurship.  But we face our own enormous challenges at home.

We are not perfect, and we never have been.  But perhaps our greatest strength is our willingness to continually improve ourselves as we face challenges to our economy, democracy, and society.

On this final note, I’d like to thank the many Samoan people who welcomed my family with so much alofa, teaching me life lessons about tolerance and diplomacy.  We trusted Samoa to take care of our family, and will never forget the warmth and generosity we experienced here.  As some of you may already know, my youngest daughter is truly “Made in Samoa,” 1) born here at TTM, 2) delivered by the lovely Tiare Tuulua (wave), 3) and named Fetu by a Samoan aunty.  I believe she is the first American diplomatic child born here in a very long time, if ever, living proof of U.S. trust in Samoa.  And since all U.S. passports prominently feature a “Place of Birth,” every time we look at our youngest’s passport, we will be reminded of our time here.

We depart tomorrow for Washington, DC, where I immediately begin my next assignment, working for U.S. climate change minister Mr. John Kerry, former Foreign Minister and presidential candidate.  I will be your relentless advocate, reminding my leadership of the Pacific.  And Toeolesulusulu, I’ll see you in a few weeks, in Berlin and beyond.

With that, please raise your glasses and join me in a toast.  “To the enduring friendship between the Independent State of Samoa and the United States of America.”

Thank you for the memories.  Faafetai tele lava.