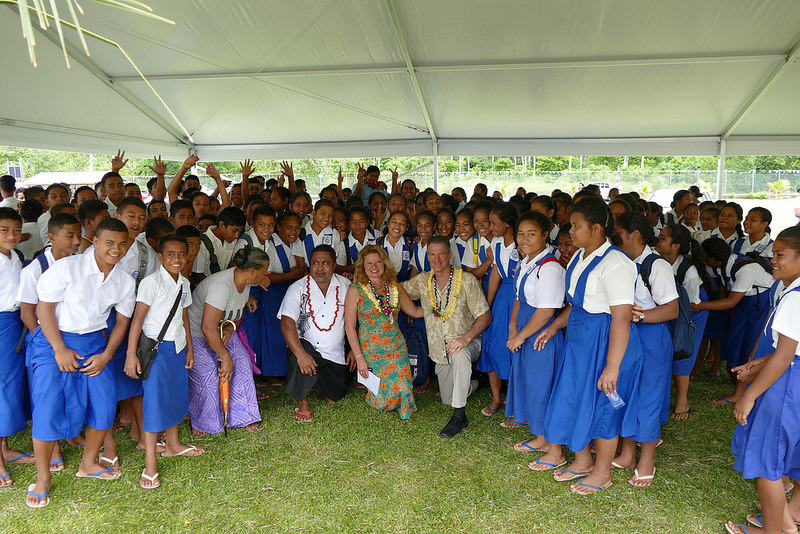 Ambassador and Gail Brown on their recent trip to Samoa. Photo credit: U.S. Department of State.tate.

People that only do good things when someone is watching are really in it for themselves. Altruism by definition is motived by concern for others. Since my arrival here, I’ve had the privilege of seeing Kiwi generosity and strong independence in action, as you make quiet contributions to the benefit of your neighbours. We know you don’t do it simply for recognition, but we notice.

So as New Zealanders take a fresh look at their role in the region, I wanted to share what I’ve noticed. New Zealand’s reputation as a long-term partner and steady friend in time of need is not only renowned in the isles and atolls of the Pacific. The United States has long admired this Kiwi approach. And today we continue to work together for our shared values and common goals throughout the region and the world.

Indeed, New Zealand mahi in the South Pacific enables the US to focus on other areas of need, both here in Oceania and in Pacific communities further north.

I’ve been following Prime Minister Ardern’s visit to the Pacific, what the Government has called a “reset”, with great interest. I could not agree with her more about the importance of this region and the factors that should drive any country’s engagement here. Her focus on strengthening friendships with Pacific nations, and moving away from the “donor-recipient relationship”, demonstrates an important distinction.

We agree wholeheartedly with the Prime Minister that we must listen to the communities we are trying to help and then work with them in true partnership. For our part, the United States seeks to ensure that what we do in co-operation is done with right intent, and the things that we do truly enable and empower the areas we are working in over the long term. This starts with a simple awareness that there are consequences to our actions, intended or otherwise.

For example, gifting a fleet of ambulances might be counterproductive if there are no trained paramedics to staff them. If those ambulances pull doctors and nurses away from providing essential services at hospitals, they may even do more harm than good. Understanding the context is crucial.

I was privileged to open two building projects at Samoan schools last month. These new construction and renovation works at Safata College and Sataoa Primary School were funded by US government grants, not loans that would put Samoans into debt for generations. The same fund was used to build the Faleolo Medical Centre, the Saanapu Primary School hall, and will be used to rebuild Asaga Primary in Savaii this year.

So why did the US select these particular projects? Well, the simple answer is that the US didn’t make those choices, Samoa did. The undertakings were the direct result of discussions between our embassy and the Samoan Government. And once these tasks were selected, we asked Samoans to build them, in compliance with international cyclone-resistance standards. The schools were built for Samoans, by Samoans. This spirit of partnership is central to the work we do, from the fale level to the national government.

It is resoundingly clear New Zealand’s assistance is also done in this spirit of partnership, for the betterment of its neighbours today and well into the future. It is not driven by a desire to have partner nations beholden, it is driven by community need. There is no expectation of obligation or payback.

In that regard, New Zealand and the United States operate in the same way – we share a belief that good neighbours don’t give from their pantry just so they can remind you later that you owe them. That said, the United States welcomes new partners to the region, as we have been welcomed by the Pacific community. We only hope they share this no-strings-attached approach.

I greatly admire the willingness of New Zealanders to help, especially in times of natural disaster or great need. And the broad capacity of your Government to be among the first to respond is essential in times of humanitarian crisis. Within 48 hours of Cyclone Gita, New Zealand had committed millions in assistance and dispatched RNZAF C130 Hercules aircraft with tonnes of aid, and a team of experts to provide technical support. Your P3-K Orion aircraft delivered aid and surveyed damage from the skies.

I’m also staggered by the number of lives that have been saved by New Zealand’s Orions just in the short time since I arrived in Wellington last June. From survivors of the sinking of the Kiribati ferry, to missing Tongan fishermen and rescue missions off the coast of Fiji, tragedy has been averted time and time again by these Kiwi planes.

It’s abundantly clear New Zealand plays a vital role for the safety of the region which, set across a vast ocean, faces unique geographical challenges. So many people depend on this New Zealand capability in times of extreme need. And these few examples are just a glimpse into a long legacy of New Zealand’s Government and military stepping in to help.

This is a legacy we’re proud to mirror in the United States with our own Coast Guard, Navy, and Marines active in humanitarian and disaster relief missions around the world.

On her recent Pacific islands tour, Prime Minister Ardern responded to a question about why partnership and friendship in the region matters. She said, “It’s because we have shared values, we have a real interest in making sure our Pacific neighbours are resilient, that they have sustainable economic development, and that they have the best start in life for their kids”. We couldn’t agree more.

• Scott Brown is the US Ambassador to New Zealand