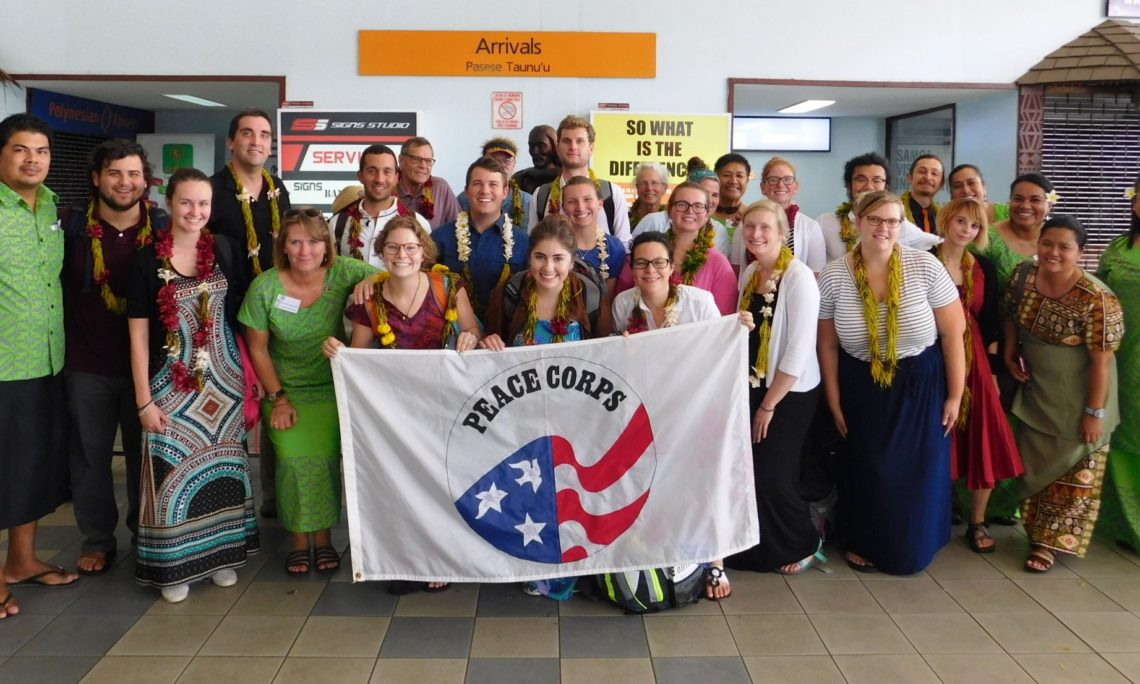 Twenty one Americans arrived in Samoa on Tuesday, joining a select group of citizens who have come to Samoa to serve as Peace Corps Volunteers.   More than 2000 Peace Corps Volunteers have served in Samoa since 1967, providing small scale technical assistance and building cross-cultural ties.  The new Volunteers were welcomed at an Ava Ceremony at the MESC fale by the Peace Corps Country Director Dr. Sherry Russell, the Acting CEO of MESC and the U.S. Embassy Acting Chargé d’Affaires Lynda Hinds.

The Peace Corps works in partnership with the Ministry of Education, Sports, and Culture to promote teaching and learning capacities in English Literacy. The new volunteers, who range in age from their early 20s to their mid-60s, will spend two years living and working in Samoan villages serving as English Resource Teachers in government primary schools.

“It is an honor to greet a new and impressive contingent of Peace Corps volunteers and to welcome them to Samoa,” U.S. Embassy Acting Chargé d’Affaires Lynda Hinds stated. “The Peace Corps’ contribution to Samoa is vast, with not only over USD 100 million in support for the program but in the immeasurable ties built between our communities. Former and current volunteers speak warmly of the time they have spent in Samoa and I know that this new group will receive the same warm welcome from the Samoan people.”

When asked why she joined the Peace Corps to teach in Samoa one of the new volunteers, Samantha Hurkmans said, “My primary aspiration is to get my students excited about reading and writing.  As an educator I believe that literacy is the key to the world.” Stephen Iverson added, “I realize how important education is in the hopes of accomplishing dreams and goals in life.”  Aftan Francis concluded, “I hope to become as much a part of my community as possible, attending church, spending time with my host family and students, forming bonds with the people around me, coupling respect with friendship and hopefully [one day] earning my place as a community member myself.”

The new group of Volunteers, the 88th group to have lived and worked in Samoa, will spend their first 10 weeks in a Pre-Service Training Program, which will include learning the Samoan language and culture along with technical training.  The first week of the training will take place in Apia, followed by 9 weeks in a village setting.  In mid-December, the Volunteers will travel to their new sites in villages throughout Samoa to spend time getting to know their communities over the Christmas holidays.  In January they will attend an additional week of technical training to prepare for the start of the 2017 school year.  These volunteers will live and work in Samoa throughout the 2016 and 2017 school years.