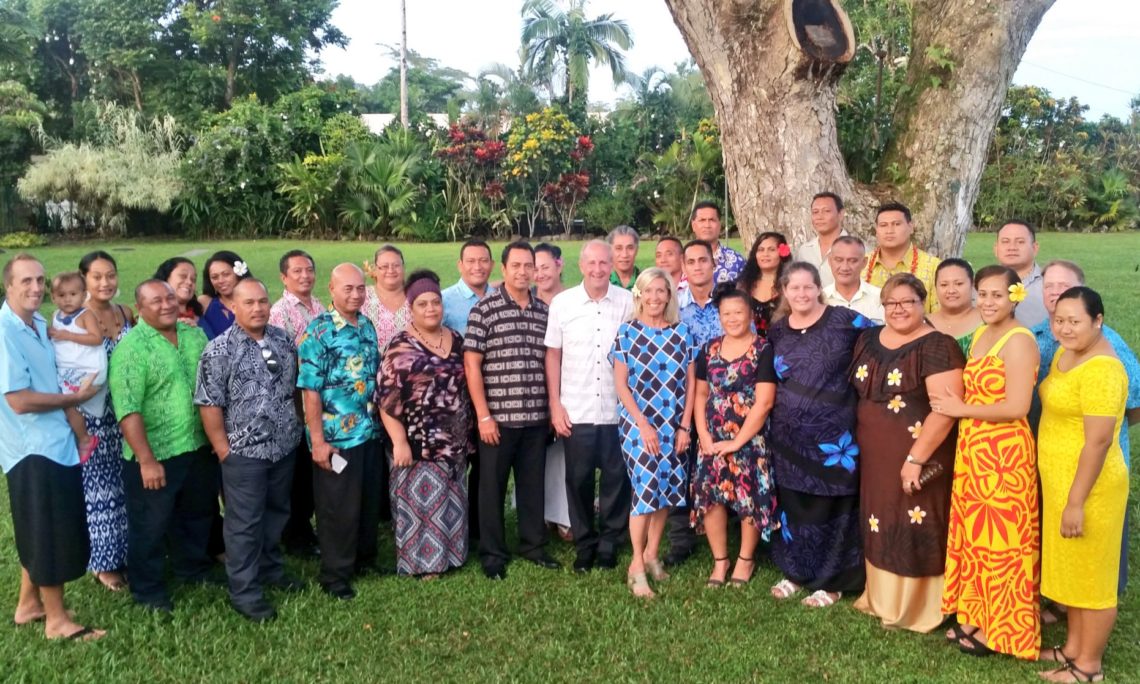 In early December 2016 Ambassador Mark Gilbert and his wife Nancy made their final official visit to Samoa.  While it was a time to bring closure to their official duties, the trip was also business as usual. The Ambassador and Nancy laid the groundwork for current projects to continue, and forged new ties between the United States and Samoa that will facilitate expanded cooperation in the health sector.

Nancy and longtime family friend Linda Esposto arrived ahead of Ambassador Gilbert to undertake preparations for a shipment of 25,000 books that will be delivered to schools around the country in the coming months.  Ms. Esposto is responsible for coordinating the efforts to bring the books to Samoa through the non profit Brother’s Brother Foundation which is the US partner involved in the US embassy Apia’s Faitau=Atamai (Reading =Wisdom) book drive. Inspired by Ambassador and Nancy Gilbert, this multi-year project has resulted in nearly 35,000 children’s literature books, textbooks and games being donated to Samoan schools.

Mrs. Gilbert and Ms. Esposto also connected with our local book drive partners, the Rotary Club of Apia, who is working with the Embassy to store the shipment of books as well as to sort and distribute them to schools.

The Faitau = Atamai program focuses on rural primary schools where Peace Corps volunteers are posted.  Volunteers play a critical role in cataloging the books received and developing curriculum and reading programs that put the books to good use.  On Friday, December 9, Ambassador Gilbert inducted the 88th group of Peace Corps volunteers to Samoa who will settle in to their respective village over the holiday period and begin teaching at primary schools across the country in January 2017.

Ambassador Gilbert also launched the opening of the Saanapu Primary School Renovations Project, which includes a new 420 sq. meter school hall, a new perimeter fence, a new water tank system, and various repairs to the main school building.  This project came about as a result of damage sustained to the school during the 2012 Tropical Cyclone Evan.

The project was funded by the U.S. Department of Defense’s Overseas Humanitarian, Disaster, and Civic Aid (OHDACA) fund, which also funded the construction of the Faleolo Medical Center. Looking ahead, this fund will also support further construction work at Sataoa Primary and Safata College.

As the Obama Presidency nears completion, Ambassador Gilbert hosted the Leadership Samoa Program to discuss the legacy of the Administration and the path forward as America transitions to a new president.  Each year the Leadership Samoa Program initiates a group of about 20 early-mid level professionals from both the public and private sectors and provides them with an intense training program of workshops and study tours at businesses and government entities throughout Samoa.  They were an engaging audience, and the talk concluded with a fruitful discussion of politics in America and the U.S. relationship with the Pacific region.

As is customary for any outgoing diplomat, Ambassador Gilbert made his final calls to the Head of State of the Independent State of Samoa, His Highness Tui Atua Tupua Tamasese Efi, and the Honorable Prime Minister Tuilaepa Lupesoliai Sailele Malielegaoi.  In both meetings Ambassador Gilbert expressed a sincere appreciation for the close relationship that our two countries share.

Ambassador Gilbert assured both dignitaries that the U.S. remains committed to helping Samoa achieve its development goals.  Just one example of this is through Ambassador’s lifelong friend, Linda Esposto, also the director of Surgicorps International, who visited to plan future medical missions to Samoa in conjunction with Samoa’s health sector.  Surgicorps is a team of doctors who provide free surgical and medical care to people in need around the world, specializing in the treatment of cleft lips and palates and severe burn scar deformities.  Linda is optimistic that Surgicorps will bring a team of doctors here in 2018.

Prior to his departure, Ambassador Gilbert met with the U.S. delegation to the 15th Green Climate Fund Board Meeting which took place in Apia from December 12-15.  This was a significant meeting for Samoa, not only as hosts, but also as the beneficiary of two project proposals which were approved during the conference: one a multi-country renewable energy project worth USD $22 million and another a USD $57 million dollar grant for Samoa to manage the flooding and enhance the climate resilience of the Vaisigano River, the largest river system running through the capital of Apia.

As the largest contributor to the Green Climate Fund, Ambassador Gilbert was proud to see a strong U.S. delegation at the meeting, contributing to sound decisions that will directly benefit the lives of Pacific peoples.

While there were many heartfelt moments on their final trip, there was a strong sense that the warmth, hospitality and beautiful culture of the Samoan people have made an extraordinary, lifelong impact on Ambassador Gilbert and his wife Nancy.  Ambassador Gilbert’s legacy will continue through the projects that he and Nancy have initiated and the connections built and strengthened between the U.S. and Samoa throughout their years of service.   For now…  Tofa Soifua.