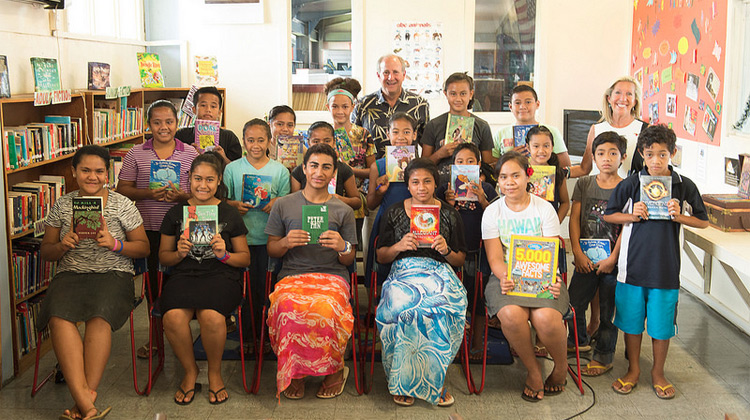 The recent visit of U.S. Ambassador Mark Gilbert and Mrs. Gilbert to the beautiful isles of Samoa came during a particularly special holiday season of sharing and community.

Upon arrival, Ambassador Gilbert and his wife Nancy spent time reading to local children at the Nelson Memorial Library American Corner. This was part of the ‘Faitau = Atamai’ (Reading = Wisdom) book drive that the Gilberts launched earlier this year. As a result of this project, over 500 new reading books have been donated by generous Americans, and are now housed at the American Corner, upstairs at the National Library. Books were also donated to the National Hospital’s Children’s Ward and to the two mobile libraries that service elementary schools hosting U.S. Peace Corps Volunteers.

Ambassador and Mrs. Gilbert also met with Rotary Club of Apia. U.S. Embassy Apia is working with the Rotary Club of Apia, the Peace Corps and the Ministry of Education to distribute the nearly 8,000 Faitau=Atamai new textbooks, a gift of the American people, to students across Samoa.

One of the Ambassador’s highlights was the Peace Corps Swearing In Ceremony to induct the 87th group of United States Peace Corps volunteers on Friday, December 11. The 87th group comprises of twenty-one bright and dedicated Peace Corps trainees who’ve completed an intensive 10-week Pre-Service Training and will now, as volunteers, move to their individual villages on Upolu and Savaii. Their primary focus will be to improve the English literacy of Samoan primary school students. The new volunteers are on two-year assignments, which will keep them in Samoa until December 2017. The Ambassador was grateful to be able to thank the Peace Corps volunteers for their service, and the people of Samoa for welcoming them into their communities.

Ambassador Gilbert expressed the American people’s commitment to the well-being of the Pacific Islands people. “I am happy to see the partnerships forged today and the commitment to building climate resiliency in Samoa. President Obama has called this century the Pacific Century, and under his leadership the United States is building on its long relationship with the region.”

As part of the historic Paris Climate Change Agreement, Secretary of State John Kerry recently announced that the United States will double its grant-based, public climate finance for adaptation by 2020. As of 2014, the United States invested more than $400 million per year of grant-based resources for climate adaptation in vulnerable countries. These investments provide support through both bilateral and multilateral channels to reduce climate risks in infrastructure, agriculture, health, and water services. As President Obama said at the historic signing of the Paris Agreement, “this new global framework lays the foundation for countries to work together to put the world on a path to keeping global temperature rise well below 2 degrees Celsius.”

Towards the end of the visit, the Ambassador met with our two Fulbright Clinton Fellows (Laura Wang and Bobby Carney), who are working as special assistants to the Samoan government at the Ministry of Health and at the Ministry of Natural Resources and Environment, thanking the Fellows for their important work, and their host Ministries for the warm welcome. Through professional exchanges like this, the work of our Peace Corps volunteers, and financial support to combat climate change, the U.S. Embassy is proud to partner with Samoa to work together on global challenges and to strengthen our friendship.

This trip to Samoa concluded in a very special way, with a visit to the National Hospital’s Children’s Ward, where the Ambassador and Mrs. Gilbert spent time with sick children, read stories together, and spread a little Christmas cheer with a few gifts. They also donated a box of books, puzzles, and board games to the ward for all of the children to enjoy. Being with friends old and new, and sharing stories and a few gifts, was the perfect way to end a magical holiday visit to Samoa. The Ambassador and his wife were delighted to have been able to enjoy the famous warm Samoan hospitality during this season of hope, peace, and family.

Related – Photo albums from the visit: