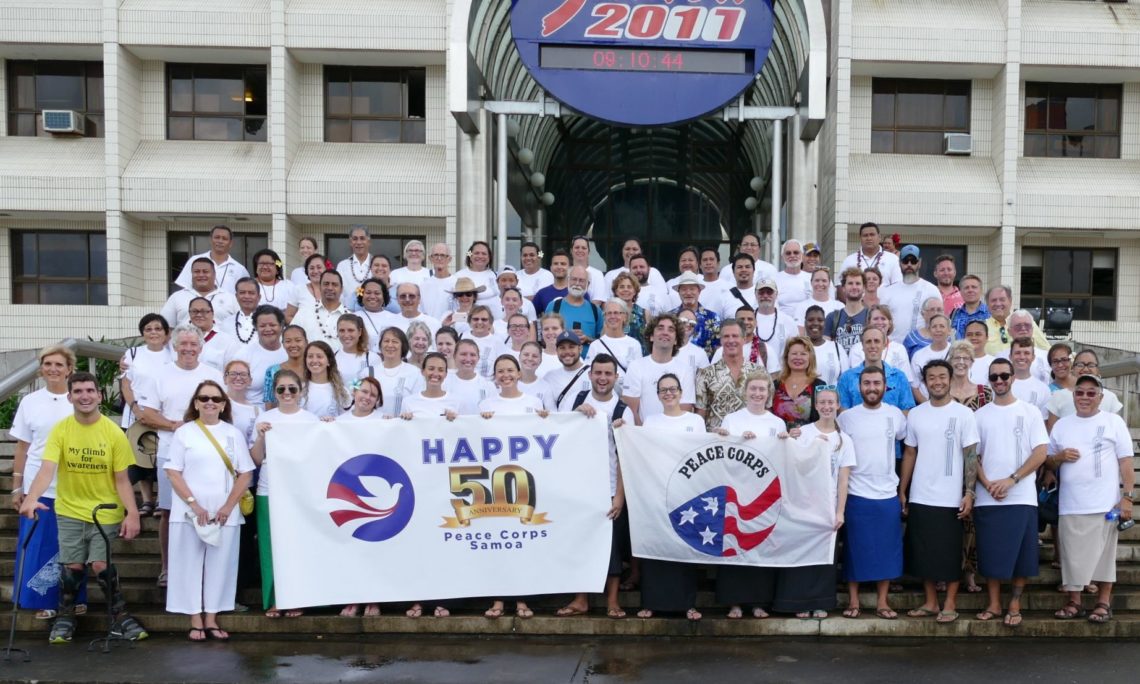 On July 28th at the US Embassy Residence in Vailima, guests gathered to enjoy a celebration of Peace Corps Samoa’s 50th Anniversary.  The celebration included songs by the FiaFia Trio who first performed together in the 1970s.  Galumalemana Al Hunkin was there as an original member of this Trio along with several former Peace Corps Volunteers.   There were also dance performances by currently serving Volunteers along with a series of video shorts featuring Samoan leaders talking about the impact the Peace Corps and Peace Corps Volunteers have had on Samoa.  These videos feature Their Highnesses Tui Atua Tupua Tamasese Efi & Masiofo Filifilia Tamasese;  the Honorable Deputy Prime Minister Fiame Naomi Mata’afa; Raema Von Reiche and her son Jordan; The Secretary General of the Samoan Red Cross Namulauulu Tala Mauala with Gorett Wulf, the Health Coordinator; and, the Leading Tatoo Artist of Samoa Su’a Suluape. Speeches were made by the Minister of Education, Sports and Culture, Keneti Sio, the US Ambassador to New Zealand and Samoa, Scott Brown and Peace Corps Country Director Dr. Sherry Russell.

The 50th Anniversary Celebration of Peace Corps/Samoa commemorated five decades of Peace Corps service to Samoa.  The very first Volunteers arrived in Samoa in 1967.  Samoa suffered a devastating cyclone in 1966, and shortly thereafter the Government of Samoa requested assistance from the Peace Corps.  Many of the first Volunteers to come to Samoa were architects, engineers and economists.  Some of these architects and engineers assisted in the construction of  the old Parliament Building, the original Faleolo Airport Terminal, and the reclaimed area along the waterfront which is now the site of the National Bank.  The early economists assisted with, among other things, the setup of the National Provident Fund.  Other Volunteers introduced the first water seal toilets, famously known as the fale Pisikoa, and worked in agriculture, health, fisheries, forestry and of course in education.  Many community leaders and leaders in business and politics speak openly and appreciatively about a past Peace Corps Volunteer who has had an impact on their lives.  During the past several months, some of the Peace Corps staff and Volunteers had the privilege to spend time with several of these leaders collecting their stories in video format about the impact Peace Corps Volunteers have made.  The short Legacy videos were showcased at the 50th Anniversary celebration on the evening of July 28th at the US Embassy Residence in Vailima.

Peace Corps Samoa is focused on helping Samoa to achieve its development aspirations by providing technical assistance and building the capacities of individuals and institutions.  As the needs of Samoa change, Peace Corps Samoa, in partnership with the Government of Samoa and other host country and development agencies, continually re-evaluates its projects and programs. Currently, at the request of the Ministry of Education Sports and Culture (MESC), the majority of Peace Corps Volunteers are working in government primary schools to support literacy development.  In a recent conversation with ACEO Maina Field and the Senior Education Officer Mr La Leao Leaana of MESC, both of whom have a long standing relationship with the Peace Corps, they spoke highly of Peace Corps’ impact on education.  In the schools where Volunteers are currently placed, Mrs. Field recognizes improvement in computer literacy, English and reading and writing programs at the primary level.  She also said that, “The [recent] inclusion of technical training for teachers where MESC and Peace Corps Samoa worked together was a highlight in our relationship.”  Mr. Leaana further elucidated that he sees the inclusion of Peace Corps Volunteers in rural classrooms as a stepping stone for primary-level students to college-level and is very supportive and appreciative of the work currently undertaken by those volunteers in remote areas.

In Sagone, Savai’i, a principal who works directly with a Peace Corps Volunteer, spoke about the value of the Volunteer’s contribution to his school.   Principal Tapuai Solomona Sasita says, “I’m very happy because … the schoolchildren learn the fundamentals of reading [and] I can see the improvements in the children’s scores.  It is helpful because we try to coordinate assistance with the parents and community.” He also says that, “Both the community and the Volunteer learn from each other. They make decisions and work together to build and develop the village. The Pisikoa learns the fa’asamoa way and the Samoan language and the Samoan people learn English and about North American culture. Both sides benefit.”

Indeed Pule Tapuia’s comments resonate with the initial vision for the Peace Corps.  The Peace Corps was established in 1961 by John F. Kennedy not just as an agency to provide technical assistance, but also with the larger vision of promoting global peace and friendship.  That ideal rests on the relationships that Peace Corps Volunteers build within their schools, organizations and communities.  As Sergeant Shriver, the first Director of the Peace Corps articulates, “Peace requires the simple but powerful recognition that what we have in common as human beings is more important and crucial than what divides us.”  This recognition of our commonalities only comes about when we live and work together side by side, learn each other’s languages, laugh together, and realize that we are all just human beings.

On this occasion of Peace Corps Samoa’s 50th Anniversary, Peace Corps Samoa would like to thank Samoa and all of the wonderful Samoans who have so generously opened their homes and their hearts to Peace Corps Volunteers over the years.  Mai le ta’ele o matou fatu, fa’afetai tele lava!