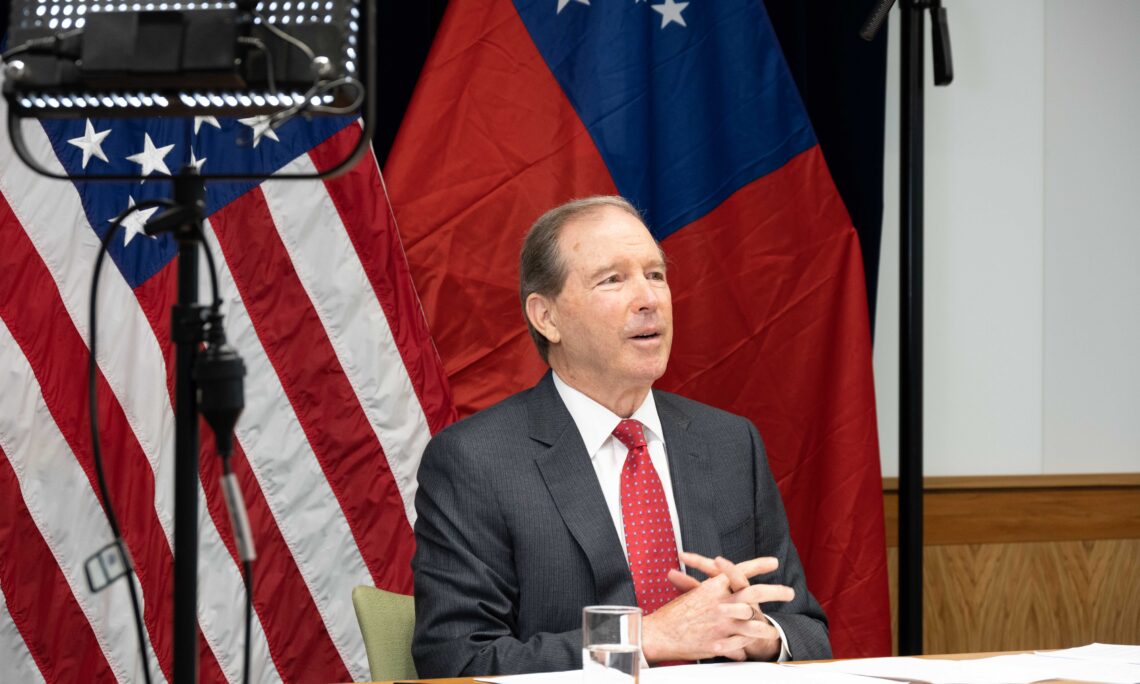 U.S. Ambassador Tom Udall Presents Credentials to His Highness the Head of State of Samoa.

I was honored to present my credentials virtually today to the Samoa Head of State, His Highness Afioga Tuimalealiifano Vaaletoa Sualauvi II. I am humbled to continue this journey by representing the United States of America in Samoa. Soifua ma ia Manuia. – U.S. Ambassador Tom S. Udall.

My name is Tom Udall, and I am the United States Ambassador to Samoa.

I’d like to take a moment to say how much I wish I could be in Samoa with you in person.  I am grateful for the opportunity I was given to present my credentials virtually so that I could get to work as the new U.S. Ambassador to Samoa.

When U.S. President Joe Biden asked me to be the Ambassador to your incredible nation, it was the honor of a lifetime.

I am assuming my duties alongside Jill, my wife, partner, and chief advisor.  I am also lucky to have the support of our incredible daughter, Amanda… and son-in-law, Judge Jim Noel.

Together, Jill and I are proud to bring with us the culture and traditions of our home, New Mexico – a state full of natural beauty and vibrant people, much like Samoa.

I am privileged to serve at a time when ties between our two countries are extremely strong.  Connected by a common history and linked by the Pacific Ocean, our countries share core values and a commitment to democracy… religious freedom… fair economic opportunity… and a free and open global community.

The United States is both Samoa’s closest geographic neighbor and home to one of the largest Samoan diaspora populations in the world.

We partner regularly to promote our common values.  At regional and international levels our two countries work together to protect the environment and fisheries… combat climate change… promote economic growth in a free and open Indo Pacific region… support COVID pandemic recovery efforts… and strengthen the tenets of democracy and human rights.

I am looking forward to meeting you, the people of Samoa, and exploring your beautiful country.  Please know that Jill and I are eager to visit as soon as circumstances allow.

I was taught at a young age that there are few greater honors than being able to give back to your community… your people… your country.  I have been fortunate to have a life of public service, including service in state and national office.

I am humbled to continue this journey by representing the United States of America in Samoa.

U.S. Ambassador Tom Udall Presents Credentials to His Highness the Head of State of Samoa.

The United States Ambassador to Samoa, Mr. Thomas Stewart Udall, virtually presented his credentials to the Head of State of Samoa, His Highness Afioga Tuimalealiifano Vaaletoa Sualauvi II, on February 17.  In his remarks, Ambassador Udall highlighted the shared history, culture, and values that link Samoa and the United States and as well as his interest in strengthening the close U.S.-Samoa partnership.

“It is a privilege to serve the United States as our representative to Samoa.  I am honored to fulfil these duties at a time when ties between our two countries are extremely strong,” said Ambassador Udall.

He reiterated the United States’ commitment to Samoa and our longstanding cooperation in areas including education, health, and cultural preservation.  Ambassador Udall also indicated that climate will be a focus of his tenure, stating that, “President Biden and I both believe climate-friendly policies and investments are necessary not only to protect our environment, but also to create well-paying jobs, spur long-term economic growth, and improve the quality of life for our peoples.”

Ambassador Udall noted the rich culture and traditions of his home state, New Mexico, and said that he looks forward to building cross-cultural ties and learning from Samoa’s equally rich culture.

“I was taught at a young age that there are few greater honors than being able to give back to your community, your people, your country.  I have been fortunate to have a life of public service and I am humbled to continue this journey by representing the United States of America in Samoa,” said Ambassador Udall.

Ambassador Udall thanked the Head of State for the opportunity to present his credentials virtually and said that he is eager to visit Samoa as soon as circumstances allow.

President Joseph R. Biden nominated Tom Udall to be the Ambassador Extraordinary and Plenipotentiary to the Independent State of Samoa on July 16, 2021 and the U.S. Senate confirmed Ambassador Udall on October 26, 2021.  Ambassador Udall is concurrently accredited as the U.S. Ambassador to New Zealand.