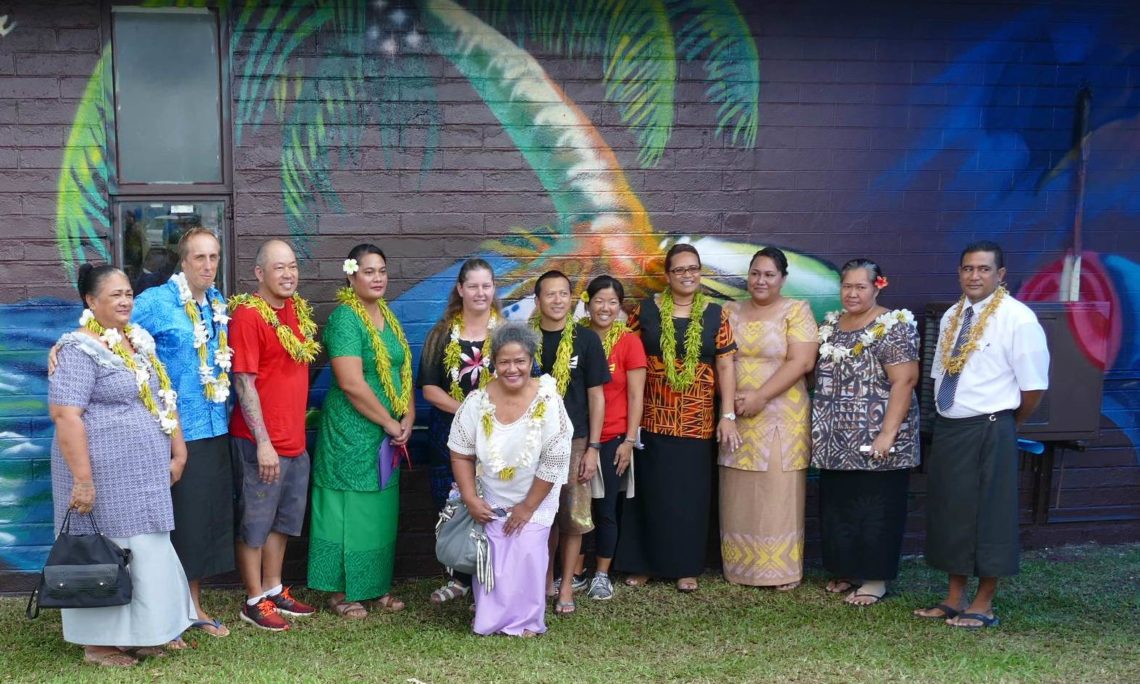 Representatives from the U.S. Embassy, Ministry of Education, Sports & Culture and volunteers from the Turn a Life Around program at the official unveiling ceremony for the Nelson Memorial Library Mural project. Photo credit: U.S. Department of State.

The U.S. Embassy is happy to announce the arrival of renowned Hawaiian Mural Artist and Executive Director of the Estria Foundation, Estria Miyashiro and his team into Samoa.  The U.S. Embassies in New Zealand and Apia have partnered to bring in Estria and his team to both countries to expand on the Embassy’s continuing efforts to actively engage with emerging generations to build understanding, cultivate support, stimulate interest, and reinforce the value of artistic expression.  Estria has been in the arts for more than 30 years, and is recognized around the world as an urban art living legend.  He is a pioneer in the arts and is acknowledged as a valued historian and a community leader.

During their time in Samoa, Estria will be muraling the outer wall of the Nelson Memorial Library facing the town clock in the heart of Apia. Participating in the project are the children from American Corner’s reading program ‘Turn a Life Around’ led by Quenjule Slaven and her group of volunteers.

Another important part of the project is the showing of the documentary Mele Murals that will be at the Centre for Samoa Studies (CSS) Building at the National University compound, Papaigalagala.  The documentary is on the transformative power of modern graffiti art and ancient Hawaiian culture for a new generation of Native Hawaiians.  At the end of the screening, Estria (who is featured in the film) will be hosting a brief Q n A session at NUS before continuing his work down at the wall.  Working together to help facilitate and bring the project to fruition is the Ministry of Education Sports and Culture and their capable team at the Library, The National University of Samoa’s Centre for Samoan Studies and the Estria Foundation.

Estria and the team are coming straight from the Maoriland film festival in Wellington, one of the foremost festivals for indigenous voices in the world, where they showcased Mele Murals.  The wall is set to be unveiled Thursday morning before the team return to Auckland to continue the same work that they have done for Samoa.