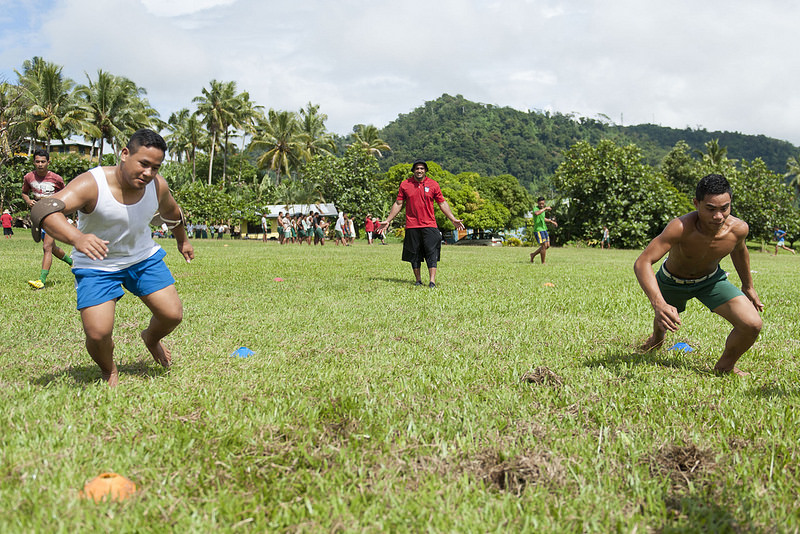 An exciting and inspirational week-long program featuring four NFL players made headlines in Samoa and provided a motivational message to youth around Upolu Island to dream big.

From March 2-6, Embassy Apia hosted a second visit of National Football League (NFL) players in collaboration with the Paul Soliai Foundation and the Samoan Ministry of Education, Sport and Culture for a sports diplomacy program featuring school visits, motivational talks, football clinics and meetings with prominent figures in both the government and sports sectors.   NFL stars Paul Soliai and Isaako Aaitui returned to Samoa, bringing with them new additions to the program – players Olivier Vernon and Samson Satele. The group met several years back when they played for the Miami Dolphins and two have since signed with other teams. Aaitui headed to the Washington Redskins, Soliai to the Atlanta Falcons while Vernon and Satele remain with the Dolphins. These players are united in their mission to give back to the community and generously offered to travel to Samoa to volunteer their time running football clinics at schools and spreading an important message of leadership and healthy living through athletics.  They also highlighted benefits of focusing on educational opportunities to better prepare for one’s future.

The program reached over 700 youth and featured visits to the oldest government school in Samoa, Avele College, as well as stops at LDS Church College Pesega, St. Joseph’s College and Sauniatu Primary.  In a country of rugby fanatics, there was some initial skepticism about trying out American football, but the youth involved quickly picked up the sport discovering the similarities and transferrable skills between the two.

Football plays a significant role in U.S. culture. The most popular professionally played sport in the United States is also the most-played sport by high school and college athletes in America. Football also has special connections to Samoa and American Samoa. According to elitedaily.com “there are currently over 30 players in the National Football League and another 200 plus athletes playing in division one college athletics who are of Samoan descent.”  Values which are important in Samoan society such as family, tradition, teamwork and respect are also closely linked to American football.

Throughout their program, the players talked about their personal journey from childhood to present day.  They mentioned the obstacles that they had to overcome on their path to success and the commitment and dedication required to achieve their goals.  Their personal narratives, many of which were linked to childhoods in Samoa and American Samoa, resonated with Samoan youth who were able to relate to their stories. They spoke about how football, and other sports, can open doors to educational opportunities.  The program went beyond simply sharing athletic talent.  It emphasized prioritizing education and being proactive in pursuit of one’s goals. In addition to more serious messages the players talked about everything from what they eat (lots of protein), to their daily training regimen to their own childhood football idols.

Chargé d’Affaires Peter Ganser hosted a reception at his residence honoring the group, which was attended by the Prime Minister, prominent Government Ministers as well as members of the diplomatic community and distinguished individuals in the fields of sport, business and media. The reception and the visit received excellent media coverage and featured prominently on national TV channels, public radio and the most widely read dailies.  The Ministry of Sport, Education and Culture (MESC) also hosted a reception for the players, their families and a variety of MESC staff. Both events provided opportunities to network and exchange ideas on the future of sport in Samoa.

This sports diplomacy program helped post connect with youth and schools and have candid discussions about the importance of staying active, prioritizing education and considering the possibility of educational opportunities in America.  It gave us an exciting outlet to share an extremely popular aspect of American culture while connecting with Samoans through a mutual shared interest in sport.