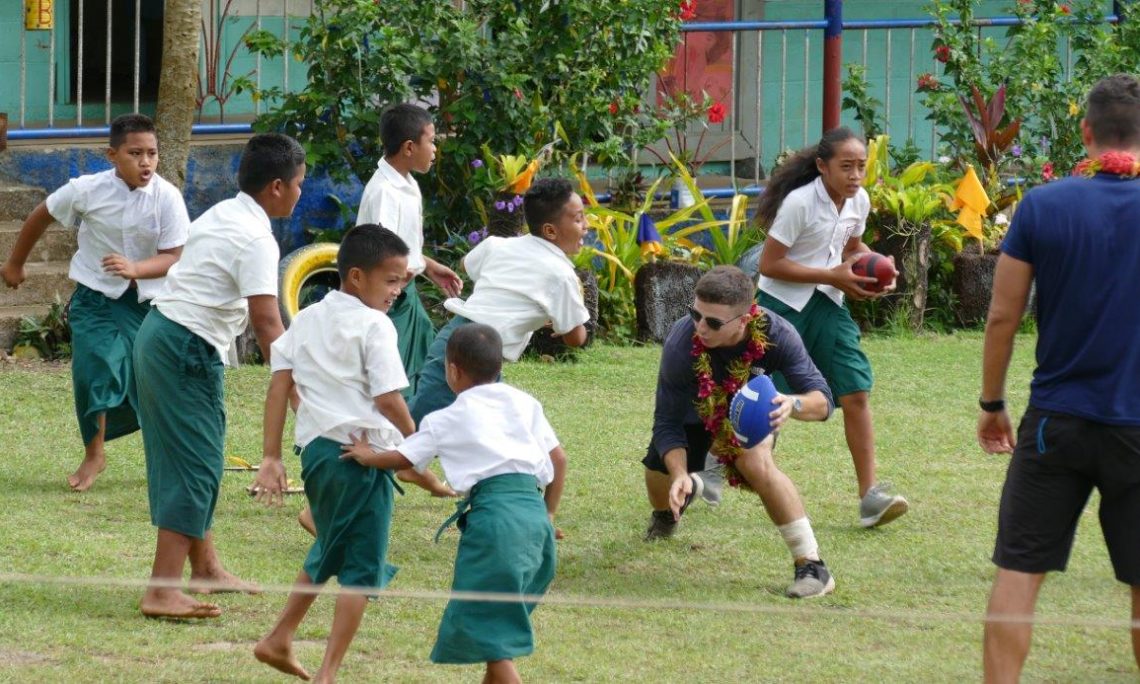 On the first day of Operation Aiga, August 6, Lieutenant Commander Christopher Jasnoch and Chargé d’Affaires (CDA) Tony Greubel were special guests on the Morning Tea with Lupe Lu Show, a live television broadcast on TV 3 Apia Broadcasting Station. This show attracts a lot of viewers in Samoa and American Samoa. This was an opportunity to explain the purpose of WALNUT’s visit to Samoa. CDA Greubel stated that “the Government of Samoa requested assistance from the United States to assist in security and sovereignty of Samoa waters due to the absence of the Nafanua patrol boat”. “U.S. Coast Guard Cutter WALNUT will be conducting a Shiprider with Officials from the Ministry of Police and Ministry of Fisheries” said Commanding Officer LCDR Jasnoch.

CDA Greubel described the importance of assisting Samoa as a nation. Going into detail on the Shiprider and Operation Aiga, which in Samoa means family, LCDR Jasnoch reiterated the importance of building relations and ensuring peace and security for Samoa.

COMREL – Meeting the people of Samoa.

Day two for Operation Aiga began with the crew ready for community relations activities, better known as COMREL in military-speak. They came prepared and ready to give to the Samoan community. Donations were collected and categorized for different organizations. First stop was to the Lufilufi Primary School.

Located on the north coast of Upolu Island, the Primary School enrolls 150+ students with about 10 teachers. The crew was greeted with smiles and cheers. Standing in a straight line with their white and green uniforms the students marched in together to say hello to their guests. These students were happy to have a special morning of reading, listening, playing games, and performing a play for their new friends.

The highlight of the day for both the Walnut Crew and students were exchanging of gifts. The Crew donated books, stationaries and sports gear while the students extending a gesture of gratitude in song and shared lunch.

Generosity continues… after a day of fun and games with Lufilufi Primary School one may think that the crew was done for the day. But, no they weren’t. They were back up and ready to give more to the Samoan community at the Samoa Victim Support Group (SVSG), a non-profit organization that specializes in providing shelter for domestic abuse victims.

The SVSG staff expressed their sincere gratitude to LCDR Jasnoch for organizing this donation. Among the donation were children’s clothes, baby bottles, toddler blankets and reading materials.

Music, laughter and cheers were sounds to be heard from the Walnut deck as guest greeted and exchanged stories of the day. The Honorable Acting Prime Minister and Minister of Natural Resources and Environment of Samoa, Fiame Naomi Mataafa gave her remarks and thanked the U.S. Embassy Chargé d’Affaires Tony Greubel and the U.S. Government for responding to the Government of Samoa’s request. She went on to thank LCDR Jasnoch and the Crew of WALNUT for assisting Samoa in patrolling its waters. She further highlighted and gave recognition to having a female from the Ministry of Fisheries as one of the Shipriders.

The Hon. Minister was presented with gifts from LCDR Jason Brand and LCDR Christopher Jasnoch. In recognition of Operation Aiga.

They Arrive in Twos…

It was Father’s Day holiday in Samoa and very few places were open but the docking of two U.S. vessels did not go unnoticed. The U.S. CG Cutter WALNUT was back from the first Shiprider accompanied by the Fast Response Cutter JOSEPH GERCZAK.

For their one business day in port both ships opened up to tours for various groups. Students from the Maritime schools of the National University of Samoa and the Samoa Shipping Maritime Academy were given full tours of both vessels, which was quite educational, let alone, a lifetime experience.

In addition to the Maritime school, several members of the Diplomatic Corps and family came onboard to see how each Cutter operated.

The final item on schedule for Operation Aiga was a bit more COMREL with two local sports. The Crews of WALNUT and JG came together to mix it up a bit with a bit of golf and gridiron football with the local Samoan players.

On August 14 CGC WALNUT set sail for another shiprider patrol along with a fresh set of Samoa Fisheries, Police, and Immigration personnel.  The Shiprider’s were very busy throughout the patrol conducting boardings and inspections of several vessels during the 6 day patrol.

In all, Operation Aiga was a great success, both in terms of its primary mission of joint maritime surveillance with Samoa, but also its secondary mission of exchanging ideas, culture and generosity with the island nation.  Both countries are better for having experienced this mission.