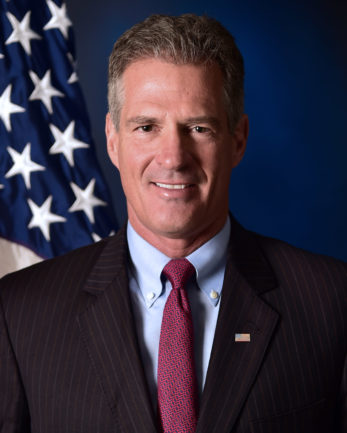 U.S. Ambassador to the Independent State of Samoa and New Zealand.

Scott P. Brown is a prominent political leader, attorney, and National Guardsman with a long history of public service.

In 2010, Ambassador Brown won a special election and served in the U.S. Senate for three years.  During his time in the U.S. Senate, Ambassador Brown was known as the most bipartisan Senator and was the ranking member on the Armed Services Committee, as well as the Committee on Homeland Security and Governmental Affairs, and was a member of the Veteran’s Committee and the Committee on Small Business.  As an elected official, he worked extensively on sex offender, child trafficking and other law enforcement issues to keep children and families safe.  He began his public service career as an Assessor and Selectman for the Town of Wrentham, Massachusetts.  He served as Massachusetts State Representative for the 9th Norfolk District for seven years and as State Senator for the Norfolk, Bristol, and Middlesex District for five.

Ambassador Brown served in the enlisted and officer ranks of the Massachusetts and Maryland National Guard.  He retired as a Colonel after 35 years of service, the last four of which he served as the Deputy to the Chief Counsel to the Chief of the National Guard Bureau at the Pentagon.  While maintaining his law practice he was also a contracted contributor and analyst for Fox National News.

Ambassador Brown worked as an attorney for Nixon Peabody, LLP, Boston, MA.  He served on the Board of Directors and as an Advisor to Kadant, Inc., Westford, MA and as an advisor to 1st Alliance Lending, LLP, East Hartford, CT, an organization aimed at helping low income citizens keep their homes.  He was an Advisor to SkyBridge Capital, New York, NY and to Ron Terwilliger Housing Foundation, Vienna, VA, and served as a board member for the USA Triathlon Foundation introducing youth to the sport of triathlon.  He traveled extensively speaking before colleges, businesses, trade associations, and financial and government advocacy groups globally.

Ambassador Brown is married to Gail Brown.  They have two daughters:  Ayla, a singer/songwriter in Nashville, Tennessee and Arianna, a veterinary who studied at Cornell University in New York.  Ambassador Brown earned a B.A. from Tufts University and a J.D. from Boston College Law School.  He has Honorary Doctorates from Lasell College (Humanitarian Letters) and Nichols College (Public Administration).

A list of former U.S. Ambassadors to New Zealand and Samoa.