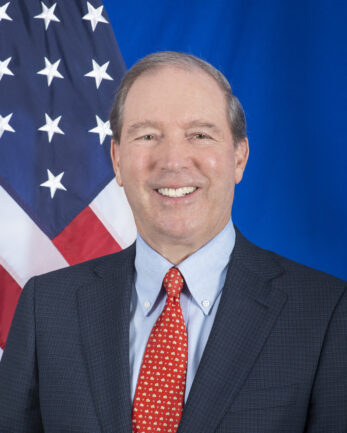 President Joseph R. Biden. Jr. nominated Tom Udall to be the Ambassador Extraordinary and Plenipotentiary to New Zealand and to the Independent State of Samoa on July 16, 2021. The U.S. Senate confirmed Ambassador Udall on October 26, 2021 and his swearing-in ceremony followed on October 28, 2021.

Ambassador Tom Udall has had a long and distinguished career in public service championing the interests of Native American groups as well as conservation and environmental protection. He served New Mexico in elected office for more than two decades as the state’s Attorney General and in the House of Representatives where he sat on committees covering Interior, Environment, Labor, Health and Human Services, Education, and on the Subcommittee on Legislative Branch. Following his election as Senator for New Mexico in 2008, his Senate committee assignments included Appropriations, Foreign Relations, Commerce, Science and Transportation, and Indian Affairs. He also served on the Commission for Security and Cooperation in Europe and was a member of the International Narcotics Control Caucus.

Prior to elected office, he served as a federal prosecutor and Chief Counsel to the New Mexico Department of Health and Environment. In 2018, Ambassador Udall received the Sierra Club’s top award for public officials, the Edgar Wayburn Award, for his leadership on environmental issues.

Born in Tucson, Arizona, Ambassador Udall comes from a family dedicated to public service. His father, Stewart Udall, served as a U.S. representative and later as Secretary of the Interior for Presidents John F. Kennedy and Lydon B. Johnson. Ambassador Udall’s uncle, Morris Udall, represented Arizona in Congress for more than thirty years.

His interests include tramping, sea kayaking, mountaineering, and tennis.