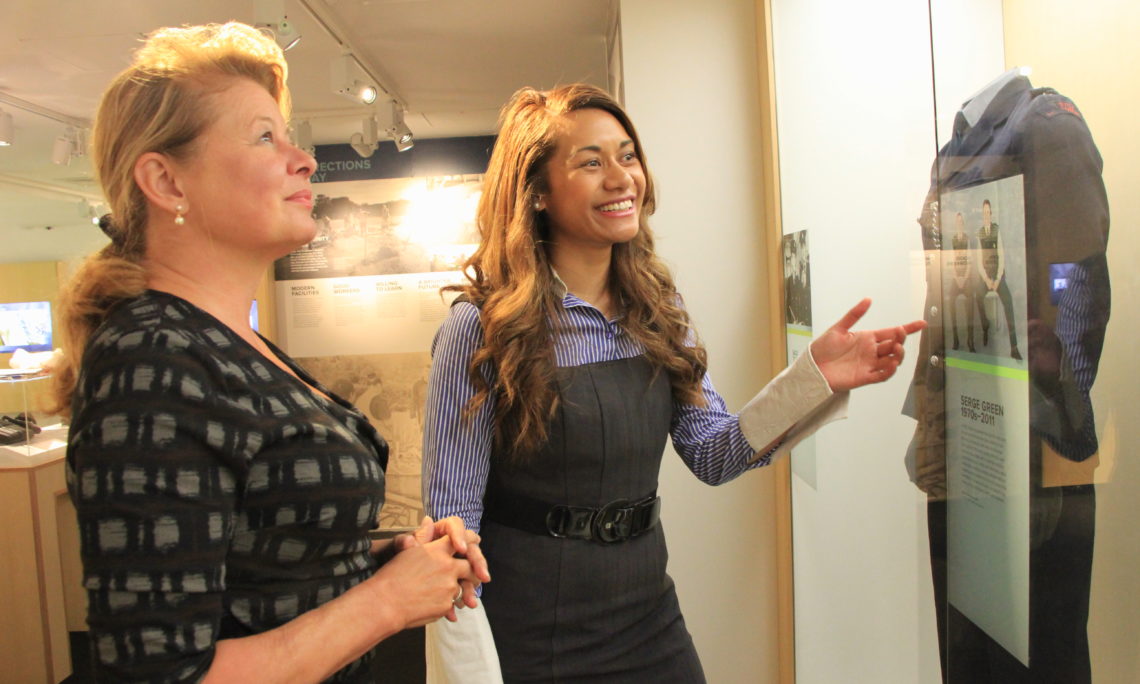 Ema shows me some of the old uniforms on display. Photo credit: US Dept. of State.

By Gail Brown, wife of US Ambassador Scott Brown

For the next blog in the Pacific Women Leaders series I met a fearless young woman, Ema, who has spent her professional career working in the criminal justice system in my new found home of New Zealand’s capital city, Wellington. Ema is serious about delivering justice and she has committed her life to advocating for Pasifika communities.

Ema works for the New Zealand Department of Corrections as an Advisor for the Legal Services Prosecution Support Team.  Among her many roles, she advises probation officers and corrections staff on pending criminal cases.

But she’s been working with prisoners, in one way or another, for many years: As a defence lawyer for four years and as a probation officer for eight years. She understands the criminal judicial system very well.

Her years working as a probation officer saw a lot of loopholes in the legal system for Pasifika peoples. “I felt the law wasn’t working for our people. Pasifika culture is beautiful with its many nuances. We pay a lot of respect to authority figures and their decisions which translates across many contexts. So when you have a Pasifika person in the legal system they accept the punishment without seeking legal advice or challenging the sentence,” she tells me during an interview in the Correction Department’s Museum. “I decided to advocate and educate my people.”

Early in her career she made changes at a grassroots level but realized real change is made at the top – in policy. Ema studied law at The University of Auckland and is now studying for a Master’s Degree in Law from Victoria University.   Her commitment to lower the high rates of Pasifika prison recidivism drives her to get into policy work.

But it’s her volunteer mentoring work that sets her apart and has earned her recognition from the United States Embassy as a Pacific Women Leader. Through her work in the Corrections Department, and through contacts within her church and in the community, she’s able to reach dozens of teens and young women.  She talks honestly with them about the dangers of cyber-bullying, drug addiction, and suicide.

“Many of these kids are turning to gangs because it’s a sense of family and identity,” she tells me, lamenting the ease with which young people can buy and sell illegal drugs. “Parents have to work and the kids are left at home and then wander on the streets out of boredom. I believe it all starts with the family and there has to be support within the family,” she adds.

Born in Auckland, her parents are both Tongan and came to New Zealand back in the 1970’s to find work in the fields and factories.  She is one of ten siblings; five girls and five boys.  Two of her brothers play professional rugby in Ireland and England.

Growing up within a big family, Ema says she’s always had to work hard.  As a teen, she helped her parents by cleaning rooms and doing odd jobs. “My parents made me and my siblings who we are today. They sacrificed so much so that we could have what we have today. I wanted to do more to help my community and carry on their hard work ethic,” she says.

Ema serves on the Charitable Trust board of the “Breakthrough Centre NZ”. Operated through the Breakthrough Church’s five campuses, the goal is to help build strong families and communities. She also mentors women, many from different backgrounds, including victims of violence. It’s her goal to encourage and empower women to be self-confident, courageous and daring by helping them to set realistic goals for themselves that will have a positive impact on their families and the community.

Through the “Breakthrough Outreach Ministry” in Auckland, she brought food to homeless people, prostitutes, and elderly shut-ins. Since moving to Wellington in April this year, she’s starting to get more involved there.

“My heart is in trying to support them and their families,” she tells me as she heads off to work on another case, hoping to help save another young person from the streets – and from prison.