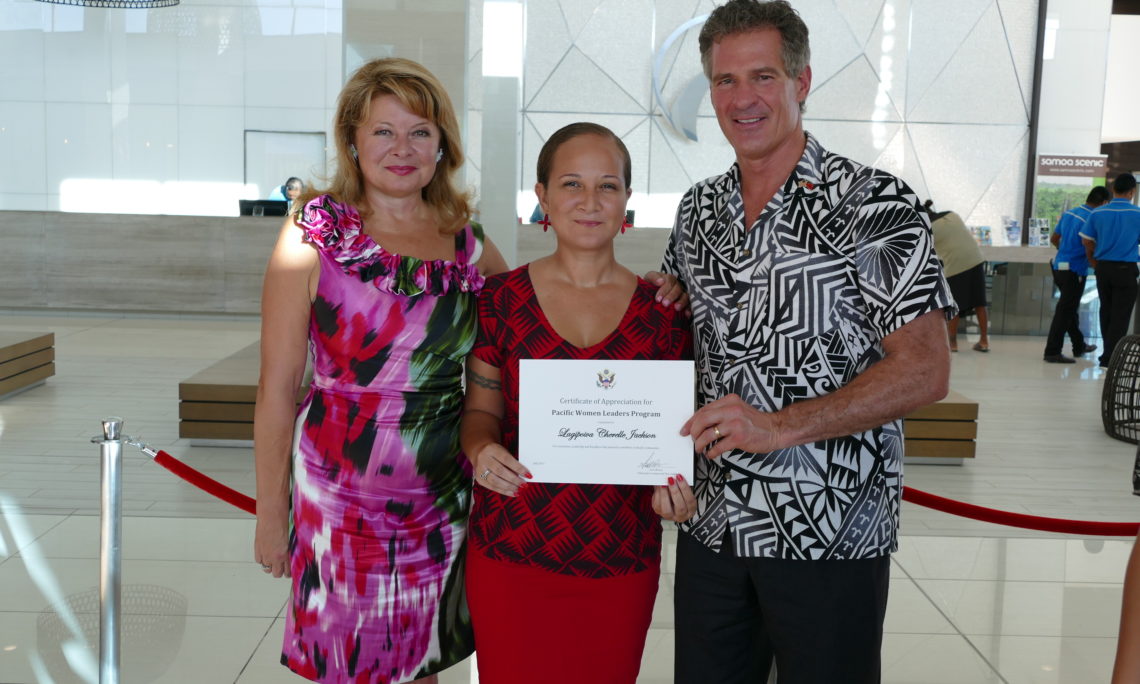 For the next blog in the Pacific Women Leaders series, I met Lagipoiva Cherelle Jackson – Environmentalist and Climate Change Communicator.

Lagipoiva Cherelle Jackson proudly speaks about her culture as the reason why she started her work as first a journalist then as an environmental writer, communicator and now a policy advisor on environmental issues relating to oceans and climate change.

“Perhaps it is in the fact that I was born in Savaii, of a mother whose passion was for the environment,” she told me recently.

As a Samoan woman in conservation she speaks highly of her female role models in all sectors and from national to the global level.

“It is easy to admire women global leaders – such as Jacinda Ardern whose initial comments on climate change are extremely encouraging, or even Wangari Maathai, Kenyan environmental political activist and Nobel laureate, and maybe even Dessima Williams, Grenada Ambassador and former Chair of the Alliance of Small Island States, but for me, it’s important that my female role models are Samoan.”

Lagipoiva then listed the women who have inspired her: “I admire the likes of Fiame Naomi Mata’afa, who has paved the way for women in politics in this country, Su’a Julia Wallwork, whose work at the community level on disaster preparedness continues to be inspiring, Fa’amuli Salu whose pioneering work on tapa making brought a livelihood source to her community and of course my own mother Va’asiliifiti Moelagi Jackson for her work on indigenous conservation practices across Samoa.”

From the village of Safua, on the island of Savaii in Samoa, Lagipoiva has profound respect for her culture and her identity as a Samoan. “It is in that foundation which strengthened my knowledge and appreciation for the environment and my pursuit for ways to communicate the value and the interactions between our actions and what sustains us form nature.”

She reflected on her upbringing in Savaii and nature which made up a big part of her childhood. “Any child who was brought up in a village will tell you that nature is essential to those early years. When you don’t have toys, television or the usual consumerist habits as part of your upbringing, then the trees, the ocean, the village pool and whatever else children use in nature, is your playground.”

This day-to-day connection with the environment is then used by Lagipoiva in her work as a climate change communicator where she uses real-life examples that she, her family, community and those around her have gone through, to effectively translate the science or communicate complex climate change scenarios to non-specialists.

“I remember being an 8 year old catching palolo with the rest of Safotu and finding that it was easy to fill ones net with palolo. Ten years on, you would be hard pressed to locate a good spawning area and even then, you would need at least an hour before you get a decent catch,” she said.

“The science is clear.  It’s become real in the experiences of Pacific islanders still living on these islands,” she says about the local effects of climate change, particularly for atoll nations. She referred to the issue of state sovereignties and loss of biodiversity within areas of national jurisdictions and the issues it raises: “What happens to the identities of those islands? Do they cease to become a nation? Do they cease to become people of that particular culture and language when the island disappears? When will these questions be addressed and how?”

She is currently the Oceans and Climate Change Manager for the Pacific Islands Programme for Conservation International. As part of her job she supports policies on oceans and climate change across the region. She continues to work with the media to build the skills of journalists in the Pacific to strengthen reporting on climate change as a way to raise awareness of the issue. She considers it a constant goal to build the capacity of other communicators to ensure effective communication of the science to communities like her own.

Various groups have recognized her work including the Reuters Institute for the Study of Journalism, the Rockefeller Foundation, Asia Pacific Journalism Center, Dart Center for Journalism and Trauma, and the International Federation of Journalists.

In 2010, while at the University of Oxford, Lagipoiva wrote and published a thesis on climate change reporting in the Pacific, finding that less than five percent of stories were dedicated to the topic annually.  It was the first study of its type.

As a mother of two, her daughter Aoilelagi and her son Tagaloalagi, she continues to underline the value of culture in conservation.

Lagipoiva says her work is an extension of her people’s legacy in protecting nature and recognizing the role of nature in the lives of Pacific islanders.

“Every single metaphor, the mix of legends that we have, is based on the environment, the interactions of the environment – of land, air and sea,” she explains. “It’s intrinsically tied, the environment and interpretations of our culture, so by conserving one, we inadvertently protect the other.”