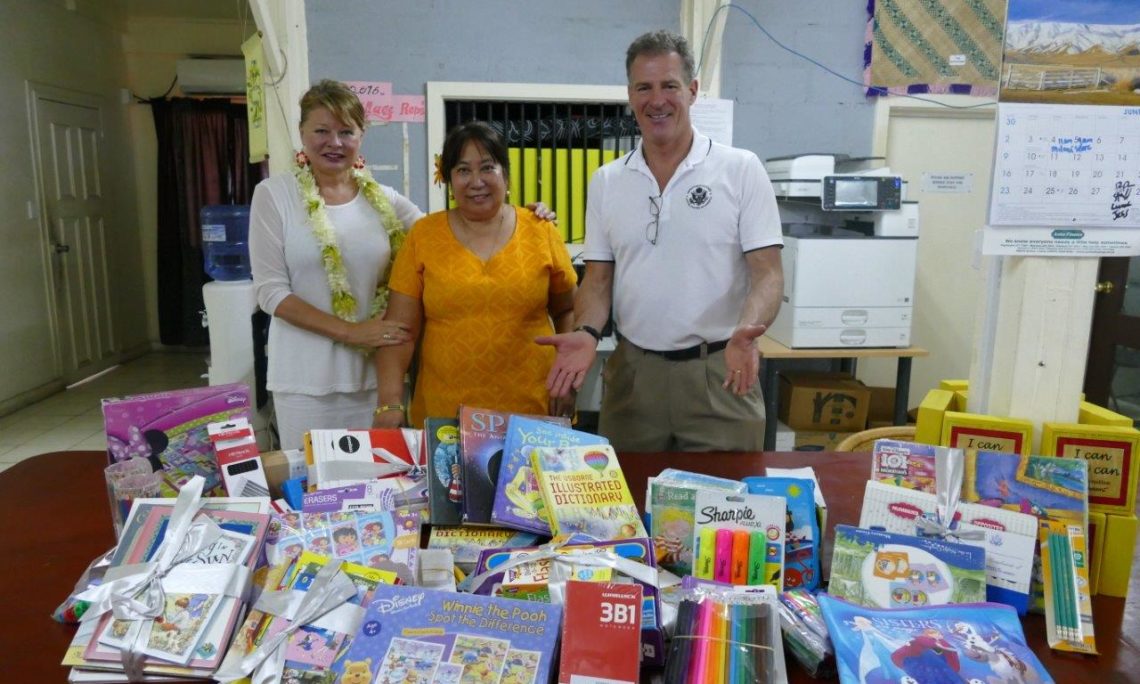 For the next blog post in the Pacific Women Leaders series, I met with Lina Chang.

Lina Chang has earned the title of “Mamma” after helping more than 500 children throughout Samoa.  In 2005, Chang opened the Samoa Victim Support Group (SVSG) which remains Samoa’s only support organization for children who are abused, abandoned, or severely neglected.

“In the beginning, we felt there was a lot of help for perpetrators of abuse, but nothing for victims,” Lina tells me during a recent interview in her office.

She talks about the feelings of rejection and shame that often accompany the victims when they arrive at the Hope Centre – a shelter where the children, mostly girls, remain until it’s safe to return home or to go into foster or adoption homes.

Samoa’s first Family Court was established in 2014.  Battling to break the cycle of violence, Lina says that for her, the incest cases are the hardest. While the abuser’s cases are making their way through the court system, counsellors are assigned to work with the child’s extended families to prepare them for an eventual return home.  The non-profit UNICEF organization helps with this reintegration process.

“We are thankful to UNICEF for their funding.  They help to make sure the kids are safe when they return to their families,” Lina explains.

At any given time, there are about sixty children staying at the Hope Centre – operated by the SVSG (the only shelter facility in Samoa).  Although many of the victims are of school age, they have never regularly attended classes. Lina says she’s helped abandoned children who were found in bushes or dumped in rubbish bins. Some of the children have serious disabilities.

“Somebody will just leave a baby at our door.  We believe we are doing God’s work in finding them homes and we will always continue to do that, no matter what.”

Her goal is to make each child feel special and valued.  If they’re old enough, they’re also taught life skills before they leave the centre.  Teenagers are trained in cooking, sewing, and crafting. They are also taught Elei – traditional screen printing. They make lava lavas, calendars, and Christmas cards which are sold in the market to raise money for the SVSG program.

“Victims often feel abandoned and get blamed.  We want them recognized, not as abused children, but as individuals on their own merits,” says Lina. “We want to see our girls achieving what they never knew they could achieve, and we want them to feel at home here.”

Volunteers are a huge part of the SVSG’s success.  Lina and her staff rely on many people to help identify abused and neglected children.

“The volunteers are our eyes and ears in the villages and they act on our behalf.  They assist the victims and bring them to our office themselves. Since everybody is related to everyone here, we have to be bold to be on the child’s side.”

Lina’s job is fraught with disappointments.  Though she’s up against a lot of obstacles, she insists she will never give up. Lina says she’s received death threats and she describes nasty complaints from people who are angry that their children have been removed from their homes.

“The most rewarding and exciting thing for me is to see a little girl who’s a victim, smiling.  I want her to feel loved.”

Samoa Victim Support Group and its work for the people of Samoa is not possible without the generosity of our supporting partners, donor agencies and the whole community; the leaders of the churches, the villages, the schools, the business community and our individual families and friends.  Together, we have been saving lives.

If you’d like to find out how you can support Samoa’s Victim Support Group (SVSG) please contact svsginsamoa@gmail.com.

Samoa Victim Support Group is only a call away +685 800-7874.  If you have some important information that will save the life of someone close to you or indirectly connected to you, please do not hesitate to pick up the phone and give us a call.