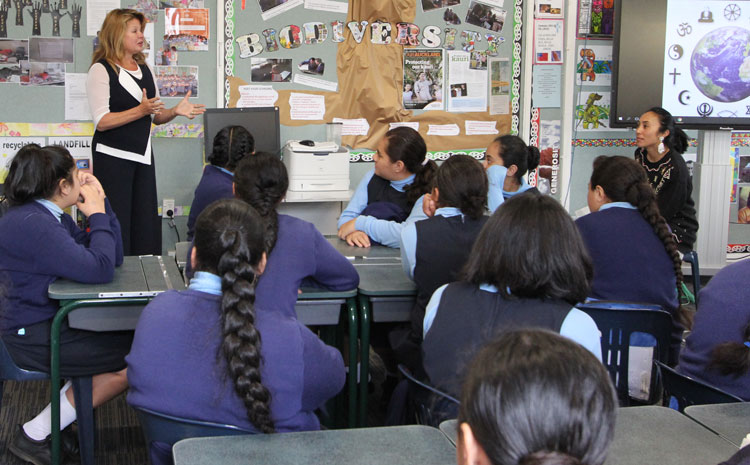 For the next blog in the Pacific Women Leaders series, I met with Nora Swann, Designer for the Pacific Fusion Fashion Show.

“I’m creative, flamboyant, loud, and fun.  That’s me,” Nora Swann declares when asked to define her personal fashion style.  She loves to visit op-shops to buy different patterns and textiles and turn them into fashions and accessories.  While Nora is tall, beautiful and fashion model material herself – it’s quickly apparent that her position as an entrepreneur and role model for young people are what most shine through.

“It’s okay to dress as yourself.  I like to mix things you wouldn’t normally see together.  Like track pants with heels and Pacific inspired up-styled and repurposed shirts.  My biggest fear is not being true to myself,” she insists while excitedly telling me about her current project.

Nora is the director for the upcoming Pacific Fusion Fashion Show to be held in Auckland on October 6th at Ambury Regional Park.  The show’s theme is “Re:creation.” It’s described as, “A celebration of this land and the elements that sustain us and provide the ultimate source of creative inspiration, drawing from the story of the Māori God Papatūānuku.”

This year’s show will be their third Pacific Fusion Fashion Show.* The first show in 2016 featured Pita Nikolas Taufatafua, who hails from Tonga, as one of their models. The shirtless athlete had just graced the international stage at the 2016 Summer Olympics Opening Ceremony where he carried the Tongan Flag.

“Having Pita in our show really helped us to get recognition,” Nora says.

This year, 13 Maori and Pacific fashion designers will showcase their work before an audience of hundreds.  Forty-five models will sashay the runway wearing 140 garments.

“It’s a show about unapologetically expressing yourself.  In Pacific Fusion, you draw from Pacific and western culture to fuse them together.  Our designs are mixing textures and materials that include flax, feathers, shells, and recycled products,” Nora explains.

Two of the designers this year will be coming from the United States:  Los Angeles designer, Nancy Elizabeth Thompson, and from Hawaii, Ida Tiare. In addition to the nine New Zealand designers, Samoa and Australia will also be represented with one designer from each country.

Nora was born in Auckland and is of Samoan and Niuean descent.   She’s the mother of two girls and she calls herself an introvert – starting out as a personal stylist. It wasn’t until she won a Cleo Magazine competition that she gained the skills necessary to become a fashion stylist. Her prize was a hands-on workshop with Angela Stone who helped teach Nora the skills of fashion styling.  Now she has added event manager to her professional portfolio.

One of her most fulfilling challenges is teaching a workshop for young girls called, “Dressed in Confidence”.   She invited us to visit one of her classes at St Joseph’s School in Auckland, where she was in the middle of a five-week program teaching young girls about the importance of self-esteem and kindness.

“What have we learned about beauty?” she asks the 11- and 12-year-old students.  Bravely, they come to the front of the classroom and declare their own “tagline”.  This is described to me as their own mantra.

“Look at me, I am queen,” declares one defiant young girl as she faces her classmates, challenging them to question her, which they don’t!

“When I look in the mirror, I am looking at beauty,” says another classmate, while the girls seem to quietly confirm it, understanding beauty comes from deep within.

“Call me queen because I will run the world,” says one of the more self-confident students in Nora’s class.  And sitting there chatting with the girls, I have no doubt there are brave leaders among them.

To know they are beautiful, is to understand they have the power to change things and to make the world a better place.  Nora is fortunate to have a job where she looks for the beauty in everyone, and brings out what’s unique and special about each one.  That is beauty.

*The U.S. Embassy is a sponsor of the Pacific Fusion Fashion Show.