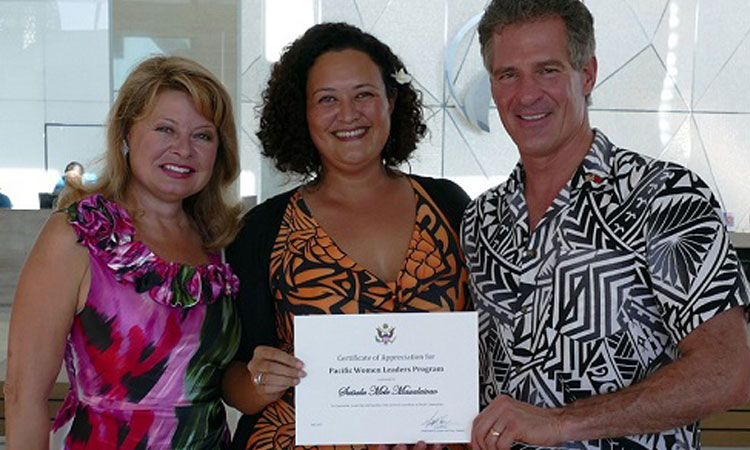 Welcome to the second blog post in a series of stories highlighting Pacific women for their contributions to humanity and the communities they serve.

Like the colourful decoration perched above her ear, Papali’i Mele Maualaivao reminds me of an exotic Pacific flower – bright, and bursting with enthusiasm. She channels her energy into empowering women across the Pacific region out of her office in Apia, Samoa. This leader is helping to tear down gender stereotypes and encourage Pacific women to speak out against violence.

Her father is a cocoa farmer and they come from the village of Utuali’i, Upolu. Her Australian mother worked for many years as a Samoan diplomat, so Papali’i Mele travelled the world and was educated in the United States. She studied Art History at Bryn Mawr College and Columbia University before completing a Masters in Creative Writing from The New School University. While living and studying in New York she won the ‘Greenest Block Award’ for her front yard garden. The award kick started her entrepreneurial journey and she launched a garden design business. She eventually won a scholarship to study urban horticulture and apiculture in Melbourne, Australia at the University of Melbourne.

On the cusp of moving to live with family in Melbourne the devastating 2009 tsunami struck Samoa, changing her life’s course. Without hesitation she moved to Samoa and volunteered for three months. “I soon realized I had the ability to contribute to Samoa and that was invaluable, so I decided to stay longer and am grateful that Samoa became my home.”

Utilizing her art and literature background she started teaching English and poetry at the National University of Samoa. She also gave seminars on topical women’s issues such as: Domestic Violence, Women’s Political Participation, and Women’s Contribution to Samoa’s Development. It was shortly after this that Papali’i Mele began working for UN Women (United Nations Entity for Gender Equality and Empowerment of Women).

“Mum and dad are feminists but I never thought I would take a job representing women in such a specific way,” she said. “I could have been in Australia but you don’t always know where life takes you. I figured this was divine intervention.”

“Samoa is prone to many natural disasters and my work adds a gender lens to disaster response by preparing communities for impact,” she said. “Too often women in these situations are labelled vulnerable so we train and empower women to help with relief efforts at a family and community level. Most communities have reasonable and pragmatic plans but our aim is to include women into conversations with first responders, NGOs and aid organizations for better planning”.

Some of the successful outcomes often overlooked in response mode are the availability of feminine hygiene and baby products, and a safe and separate washing facility for women and children at night.

One of the events she’s helped to develop is “Orange Day”.  It falls on the 25th of every month and is a day to raise awareness about gender-based violence and to give Samoans from all walks of life a chance to discuss the issue. “Everyone deserves a life free from violence,” Papali’i Mele states. She established the monthly discussion group, Ending Violence in Samoa Roundtable. “Our mandate is to empower through learning and discussion. The work we do now is for our grandchildren’s benefit” she says.

One of her most passionate advocacy works is to increase the number of women in Samoa’s Parliament. Papali’i Mele beams with pride as she recounts when Prime Minister Tuilaepa Sailele Malielegaoi made a 2013 constitutional amendment that mandated five seats be reserved for female candidates guaranteeing that 10%of Parliament will be filled by women. This saw a record number of 28 women run in the 2016 election. Samoa now has its first female Deputy Prime Minister, Fiame Naomi Mata’afa.

“Deputy Prime Minister Fiame is a brilliant mentor,” Papali’i Mele says. “She has political prowess, intellectual acuity, and is a brilliant orator. She has shared her vulnerability with other aspiring female politicians in our workshops. Great leaders reveal their learnings and I have seen how she has emboldened other women to take on the political process by sharing her story.”

UN Women’s efforts are focused on the next election in 2021. “It’s a long term project to build self-esteem, investment in the political process, and break negative myths about politics.”

Papali’i Mele is proud of her work with a group called, GLOW, which stands for Girls Leading Our World.  The goal of this group is to encourage confidence in young girls’ years 8 and 9, along with self-reliance.

“Never give up on yourself.  That means you give one-hundred percent and never, never give up,” Papali’i Mele tells me.  “Go out into the world and come back and share with your people, and then see where they will take you as a nation!” Papali’i Mele encourages.

Thanks to her hard work, women throughout the Pacific have a stronger voice.