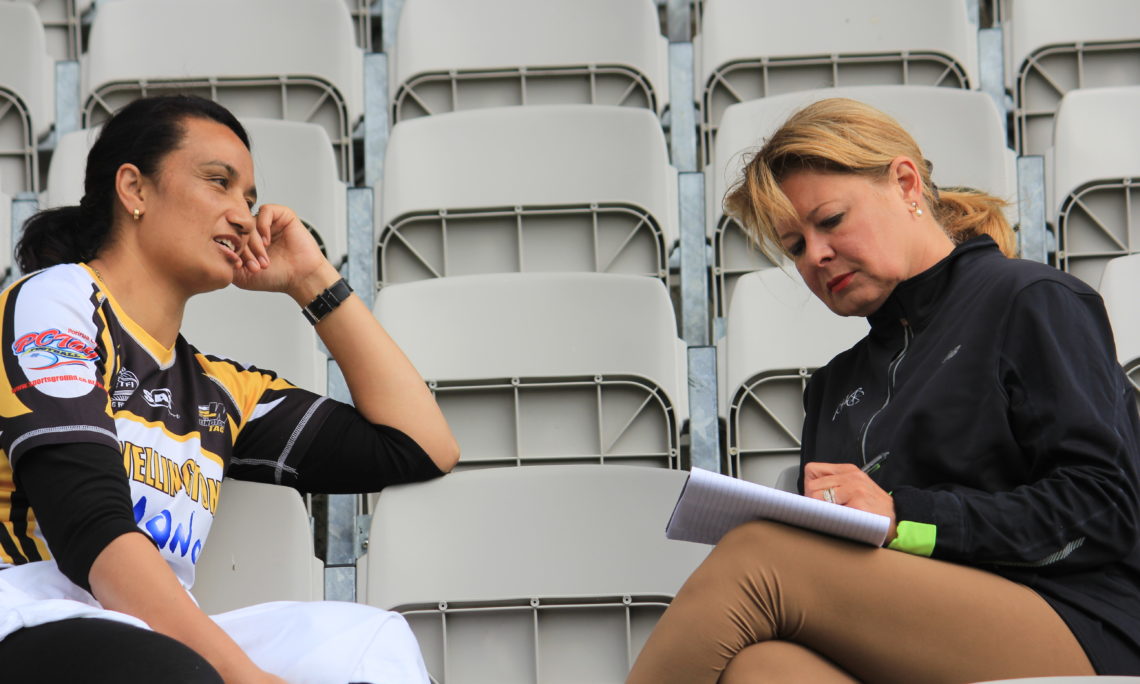 With Mrs Brown in the grandstand. Photo credit: U.S. Department of State.

For the next blog in the Pacific Women Leaders series, I met with Vanessa Masoe – Rugby player. Mentor.

By profession, Vanessa Masoe is a Careers Development Consultant to the Tertiary Education Commission (formerly Careers New Zealand). By passion, Vanessa Masoe is a determined competitor who loves the adrenaline rush of playing rugby. She now works to combine these skills by volunteering her time in mentoring young athletic girls who want to play rugby.

Vanessa started playing rugby when she was 19 years old and in college.  She dreamed of playing for the Black Ferns Rugby Team. After trying out for the team and being selected among the “most promising players,” she unfortunately didn’t make the team.

Masoe knows what it’s like to be the captain and to make decisions for the team.  In 2002, she was selected for the well-known Manu Sina (Samoan Women’s) International Rugby team.  Prior to that, she was Captain of the Northern United Rugby Team and the Wellington Women’s Representative Rugby Team.  After playing rugby competitively for ten years, Masoe now takes many of the lessons she learned on the field into the community, by volunteering as a mentor for young female rugby players. She’s helping these young women achieve their dream through the mentorship program under United Rugby Club and Wellington Samoan Rugby Union. This is the first rugby club in Wellington to establish a valuable mentoring program.

Self-confidence is key to success in one’s career and Vanessa believes rugby helps to instill self-confidence in girls. Though she believes it’s still predominately a men’s sport, she’s confident that women’s rugby will grow in popularity as more girls become interested in playing the game.  As a volunteer mentor, she works with the girls on their rugby skills and on their responsibilities toward sportsmanship and teamwork.  She helps direct them in making smart decisions about their own careers and futures.

“I feel I can give back to them with my skills.  I like to work and guide them with their decisions,” she told me recently when we met at the Jerry Cullins Field in Porirua where she used to play competitively.

Vanessa’s mother has always been her biggest support and says her mother was the one who encouraged her.

“My mom is very selfless and has always given to others.  I feel it’s important to give back to serve people in our community, like my mother.  Parents are the first teachers and they are the biggest influence in kid’s lives,” explains Vanessa, who was born in Wellington.  Her mother is Samoan and her father is part Samoan. She is fluent in the written and spoken Samoan language.

“Pasifika parents don’t talk enough to children about careers.  Their children learn that in school,” she insists.

Vanessa wants to encourage more parents and coaches to talk with children about their future.   Through her workshops, she talks about the three steps of career development:  Knowing oneself and what one’s skills are; discovering what careers are available and suitable; and making good career choices.

“A lot of students are taking courses their parents want them to take, rather than what they want.  They often fail because of that,” says Vanessa, who works with parents, coaches, and church leaders to come up with career solutions that work for the students AND their families.

Even though Vanessa doesn’t play a lot of rugby anymore, the sport remains a true passion and she’s continuing to build a strong education and career network within the Maori and Pasifika communities – helping young people achieve their career dreams through athletics and studies.