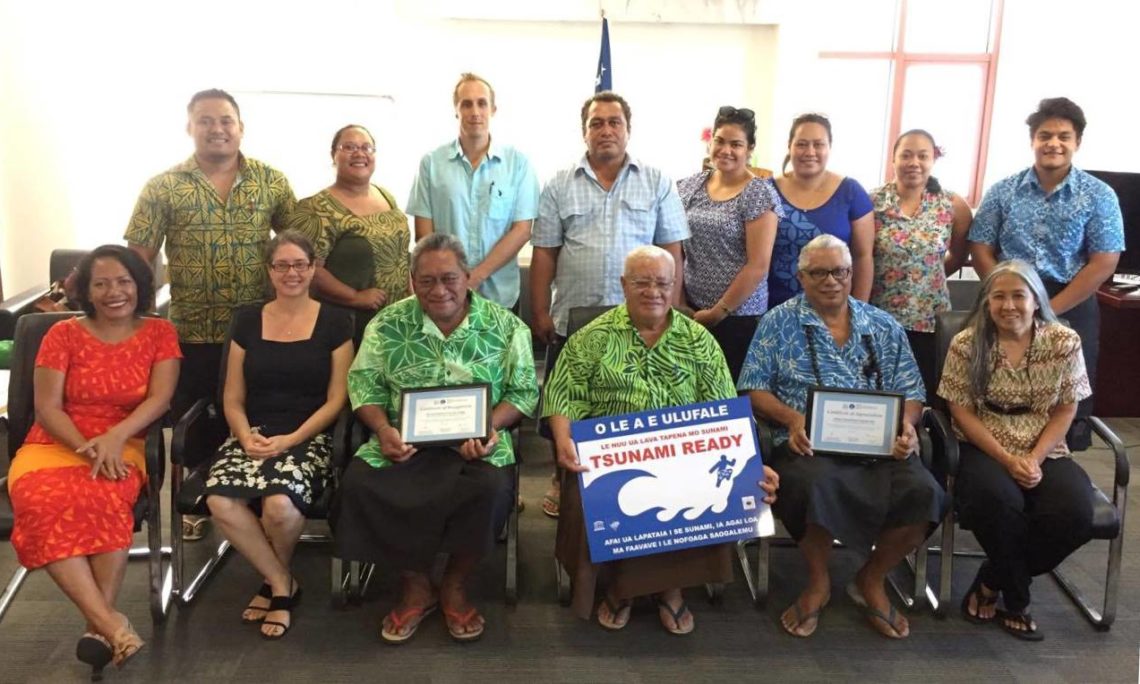 Savaia, on the southern coast of Upolu, will be recognized by the UNESCO Intergovernmental Oceanographic Commission (IOC) as Samoa’s first Tsunami Ready community at a ceremony on June 20, 2017 at the Ministry of Natural Resources and Environment (MNRE), TATTE Building. Samoa is the first Pacific

Savaia, on the southern coast of Upolu, will be recognized by the UNESCO Intergovernmental Oceanographic Commission (IOC) as Samoa’s first Tsunami Ready community at a ceremony on June 20, 2017 at the Ministry of Natural Resources and Environment (MNRE), TATTE Building.  Samoa is the first Pacific Island Country to implement the program.

The CEO of MNRE and Chair of the Disaster Advisory Committee, Afioga Ulu Bismarck Crawley said that “The Tsunami Ready program is critical in identifying gaps in tsunami preparedness and response at the village level and to guide the implementation of tsunami related capacity strengthening programs.  Savaia has been selected as the pilot village for this program as it has already completed the community disaster and climate risk management program and had participated in the IOC’s Exercise Pacific Wave 2017 (PACWAVE17).  This program will be up-scaled to become a multi-hazard readiness recognition program for Samoa”.

To achieve the recognition, Savaia had to meet 10 guidelines covering hazard assessment, tsunami signage, evacuation mapping and planning, education and outreach, and 24hrs x 7days communications and response planning.  The achievements were put into action through a community exercise that was part of the as part of IOC’s PACWAVE17.

The UNESCO-IOC Tsunami Ready pilot is performance based community recognition program modeled after the US NOAA National Weather Service’s successful TsunamiReady®  Program.  Approved in 2015 in the Caribbean and globally recognized in 2017, it is being piloted in interested countries of the UNESCO IOC’s Pacific Tsunami Warning and Mitigation System (PTWS) in 2017 and 2018.  The Pacific Tsunami Warning and Mitigation System encompasses 46 countries, covering the Pacific Ocean and its marginal seas spanning more than 20,000 kilometers, and over history, has suffered 75% of the world’s fatal tsunamis.

“Tsunamis wreak havoc locally and can also cross ocean basins with deadly waves that take 15 hours to reach Samoa.  But in the Pacific, 99% of our casualties have been caused by local tsunamis that attack in minutes, and it is for these that tsunami education, awareness, and preparedness beforehand to be Tsunami Ready will save lives,’’ said Dr Laura Kong, Director of the ITIC.

Afioga Tusanilefaiiao Iosefatu Reti spoke on behalf of the village saying, “This is indeed a proud moment for Savaia, because never before have we realized how important it is to prepare for disasters such as Tsunami.  As I was just saying (previously in Samoa) in 2009, when the alarm about the Tsunami came, our people ran to the sea to watch the wave… now we know it is not the sea but the higher grounds  that we should be going to.  We are indeed honored and privileged to be selected for this pilot program, and we want to extend to UNESCO and to Dr Kong (the ITIC) our sincere appreciation as well as MNRE and all who helped us in this program.  We hope that we contributed something in some way to the development of this program, so to assist you in your endeavors and with other villages that you will be looking into.  But for today it is very touching to be present today and receive this certificates and presents from you.  And we pray to God and hope that we would not experience another Tsunami… but at least we now know what to do in the event of another one.

So thank you very much and God bless!”

The UNESCO IOC office in Suva and International Tsunami Information Center, a partnership of UNESCO IOC and the US NOAA, are working together to facilitate pilots in the Pacific.  Currently, Mexico and Guatemala in Meso-America, Ecuador in the South East Pacific, and Tonga and Vanuatu in the South West Pacific have indicated interest.  In February 2017, Cedeno, Honduras, a small coastal town known for its seafood, and in May, Ostional, Costa Rica, a small coastal town visited by many tourist to observe endangered sea turtle nesting, were recognized as Tsunami Ready communities.