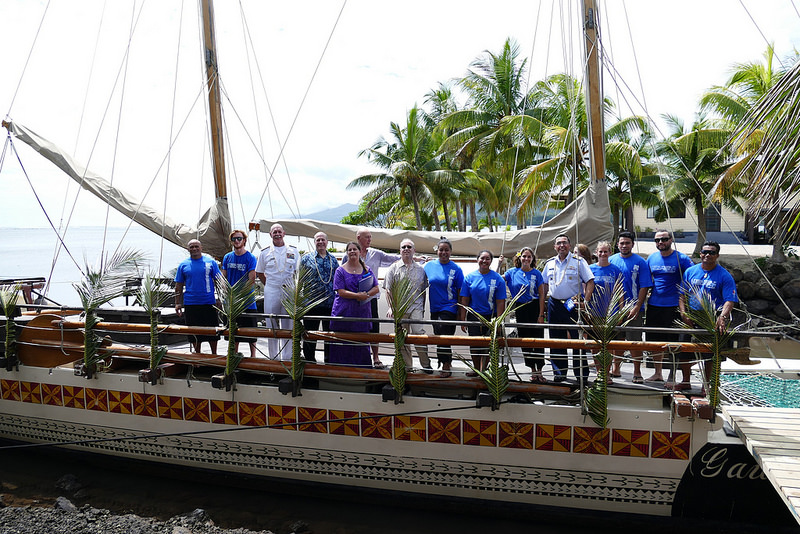 We had productive meetings with government and law enforcement officials, including Prime Minister Tuilaepa, and Peace Corps volunteers. - See more at: https://blogs.state.gov/stories/2016/03/03/strengthening-relations-large-ocean-nations#sthash.2XBNlOgq.dpuf

Repost from DipNote – About the Author: Daniel R. Russel serves as the Assistant Secretary for the Bureau of East Asian and Pacific Affairs at the U.S. Department of State.

Crossing wide swathes of open ocean to get to the Pacific Island nations of Samoa, Tonga, and Palau gives you a great appreciation for the ancient mariners who first reached these islands, with only the currents, stars, and sun to guide them. Even my traveling companions, Admiral Scott Swift, Commander of the U.S. Navy’s Pacific Fleet and Rear Admiral Vince Atkins, Commander of the U.S. Coast Guard District covering most of the West and South Pacific, would find such a journey challenging in a small craft!

We visited these three countries to see the results of our joint efforts — combating the threat of climate change; protecting the environment and security of these large ocean nations from overfishing and transnational crime; improving daily life through economic development and standing up for women’s and LGBT rights; and enhancing disaster preparedness — the importance of which was underlined during our trip as Fiji was struck by the most powerful cyclone ever to hit the Southern Hemisphere.

Our first destination was Samoa, where we saw how closely Americans and Samoans are working together. We had productive meetings with government and law enforcement officials, including Prime Minister Tuilaepa, and Peace Corps volunteers.

But perhaps our most memorable stop was at the Gaualofa, a traditional Samoan ship. As it honors and keeps alive Samoa’s past, this ship is also helping build its future by empowering women like Captain Fani Bruun, a pioneering conservationist who is also the country’s first female traditional voyaging captain. Women are stepping up in Samoa, participating in politics and civil society, and America is committed to working with them.

In the “Friendly Islands” of Tonga, we received a very warm reception from the government, King Tupou VI, and the Tongan people. One of our most memorable conversations was with Joleen Mataele, a transgender rights activist and nominee for the State Department’s prestigious International Women of Courage (IWOC) Award. This award is one way we spotlight the good work of women like her around the world – women who work for equality and respect, and in so doing, make their entire countries better for everyone.

We also cut the ribbon on a U.S.-funded evacuation center that will protect Tongans in a low-lying area from cyclones up to Category 5. The whole community turned out, making the event a celebration. People of all ages enjoyed the beautiful day, even as they prepared for future storms.

In Palau, a country that stands out for its beauty, even among the Pacific’s many picturesque islands, we had a full schedule. We met with President Tommy Remengesau, who has bravely committed his nation to conservation, banning commercial fishing, and declaring one of the world’s largest marine protected areas. Changes like this, which affect a country’s economy, are never easy, but America is committed to supporting Palau, as I said in remarks to a joint session of Palau’s Congress.

We also had the good fortune to discuss climate change, maritime security, and oceans with our other Compact of Free Association partners, as President Peter Christian of the Federated States of Micronesia and President Hilda Heine of the Republic of the Marshall Islands were in Palau for the Micronesian Chief Executives Summit.

Each Pacific Island country has both unique and shared challenges. And each country develops its own solutions to some problems, and seeks shared solutions for others — as the Micronesian leaders were doing during their Summit meeting. I had the privilege of listening to and learning from the people and leaders of each of these nations.

America wants to continue working closely with the Pacific Island nations, to share the expertise and resources that only we can provide. The values we share bind us together — they inspire programs like “Our Ocean,” Secretary Kerry’s signature initiative to unite us all to protect this resource that we have taken for granted for too long.

Our values prompt us to look out for each other’s security, whether it’s Palauans serving in the U.S. Armed Forces, our cooperation with Tonga’s military, or our work with Samoa’s police.

The United States has a long history with the peoples of the Pacific, and a bright future. Along with partners like Australia and New Zealand, we’ve supported the development of independent nations throughout the Pacific, and they in turn have carried outsized weight in global affairs. Let’s not look at them as small island countries. They are large ocean nations.

Photos from the samoa visit on FlickR.
About the Author: Daniel R. Russel serves as the Assistant Secretary for the Bureau of East Asian and Pacific Affairs at the U.S. Department of State.