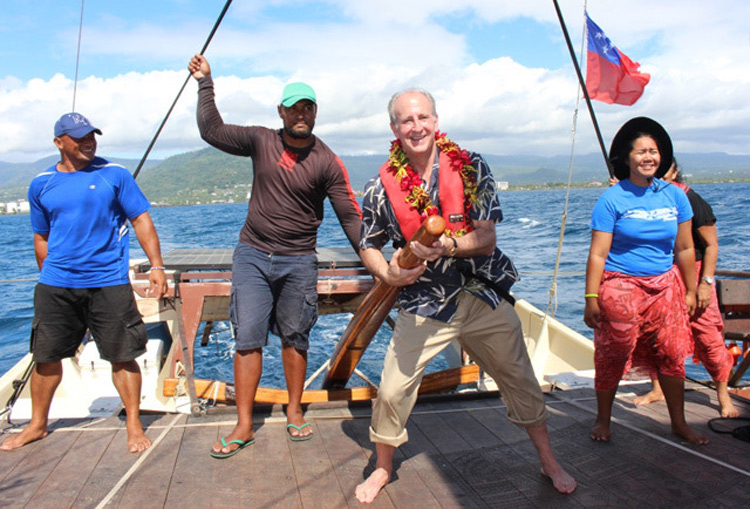 Ambassador Gilbert at the helm (Photo credit: US Department of State).

Over 150 years ago the United States established consular relations with Samoa.   Our strong relationship with Samoa is based on ties of family, faith and a wonderfully vibrant government to government partnership.  Our countries are united by our shared democratic values and our ability to work as partners to promote peace and prosperity throughout the South Pacific.  This was the message that was echoed by United States Ambassador Mark Gilbert at the 239th Independence Day Celebration that was celebrated in Samoa on Friday, July 10. It was a bitter-sweet event, for alongside the July 4th celebrations, we bid farewell to Deputy Chief of Mission, Peter Ganser and his wonderful wife Michelle.  Former DCM Ganser will move on to become the new Senior Advisor for Antarctica Affairs in Washington, D.C.

During his second visit to Samoa, Ambassador Gilbert went onboard Samoa’s traditional sailing vessel, Gaualofa, for an hour long sail outside of Apia Harbor on July 8, 2015.  Gaualofa is part of the Aiga Folau o Samoa (Samoan Voyaging Society), a non-profit organization dedicated to reviving the art of traditional Polynesian voyaging.  This year, Embassy Apia awarded the society a grant of $26,000 SAT to assist with captain and crew certification, as well as to conduct environmental outreach activities around Samoa.  Embassy Apia’s support resulted in Samoa’s first female, internationally certified voyaging captain Ms. Fealofani Bruun taking the healm.   The Samoan Voyaging Society has been using Gaualofa as a means to promote environmental conservation and traditional sailing and navigation not only in Samoa but across the Pacific.  The Ambassador’s presence onboard the vessel was a wonderful chance to mark our shared appreciation for traditional voyaging, environmental conservation and preservation of Samoa’s culture. At the end of the Apia Harbor sail, the Gaualofa captain and crew conveyed their heartfelt appreciation to the Ambassador and staff for their generous support.

A team of doctors and administrators from the Shriners Hospital for Children in Hawaii have once again graced our shores to help provide free medical care for the children of Samoa.  Throughout the week, the Shriners worked closely with Samoa’s National Health Service (NHS) to help identify patients who are candidates for orthopedic surgery.  They were here to treat children with burns, cleft lips and palates, orthopedic problems, and spinal cord injuries. All of their work is funded through private donations from the United States.

Formed in New York in 1870 and now run out of Tampa, Florida, the Shriners are a fraternal order dedicated to public service, with almost 200 chapters (or temples) around the world. The group is best known for their red fezzes and their Shriners Hospitals for Children as well as twenty-two specialized medical centers that treat certain childhood afflictions free of charge.

The visiting Shriners were able to see more than 200 children through clinics conducted at the Motootua National Hospital and the Tuasivi Hospital in Savaii.   Shriners are also able to send children needing more complicated surgeries to Hawaii for treatment.  Throughout the history of this program, over twenty-five Samoan children have received medical treatment in Honolulu.  The Shriners pay travel costs for the patient and an accompanying care giver, as well as provide accommodation in Hawaii for the duration of surgery and care.  This year, the team hopes that over twenty patients with serious medical problems will be able to travel to Honolulu for treatment.